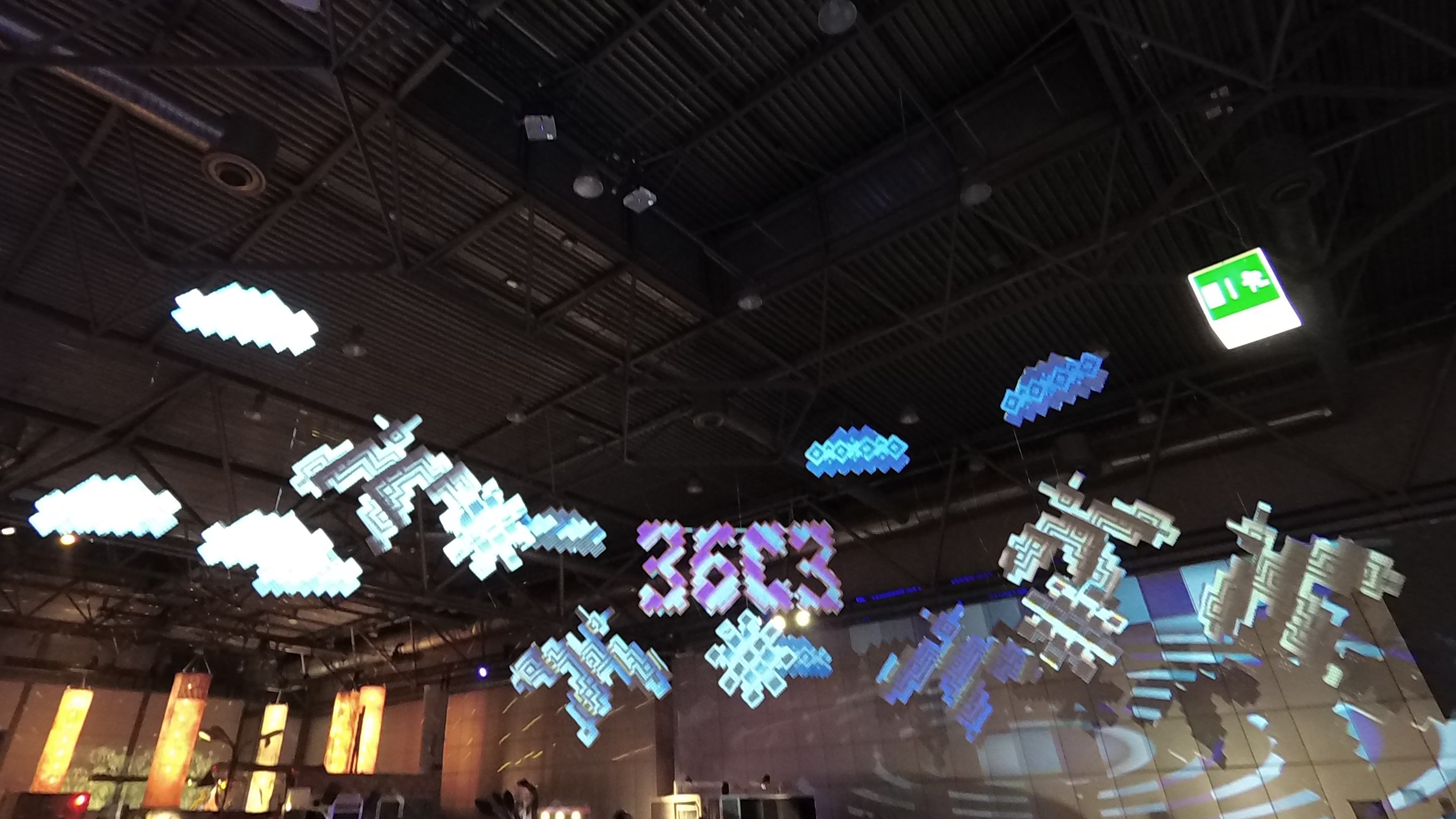 I participated in the 36th Chaos Communication Congress (36C3) at Leipziger Messe from December 27th to 30th, 2019. It is known as the biggest hacker congress in Europe, yet most of the tickets are sold out during the presale because of the high demand. I was fortunate that Jan, a friend of mine from the research group in Montreal, reserved a ticket for me. As he has been at the congress since the 18th edition, I asked him what I need to bring on the day before the event. The first thing he told me is a DECT phone; there is a unique infrastructure at the congress that participants can get a four-digit number and call each other or worldwide if you bring a DECT phone. Of course, I don’t have one, so I relied on the insecure Wi-Fi network.

Felix from Wisp Collective kindly hosted me at his house project with So, an artist friend based in Berlin. That is why I helped the collective loading and installing their piece the day before. 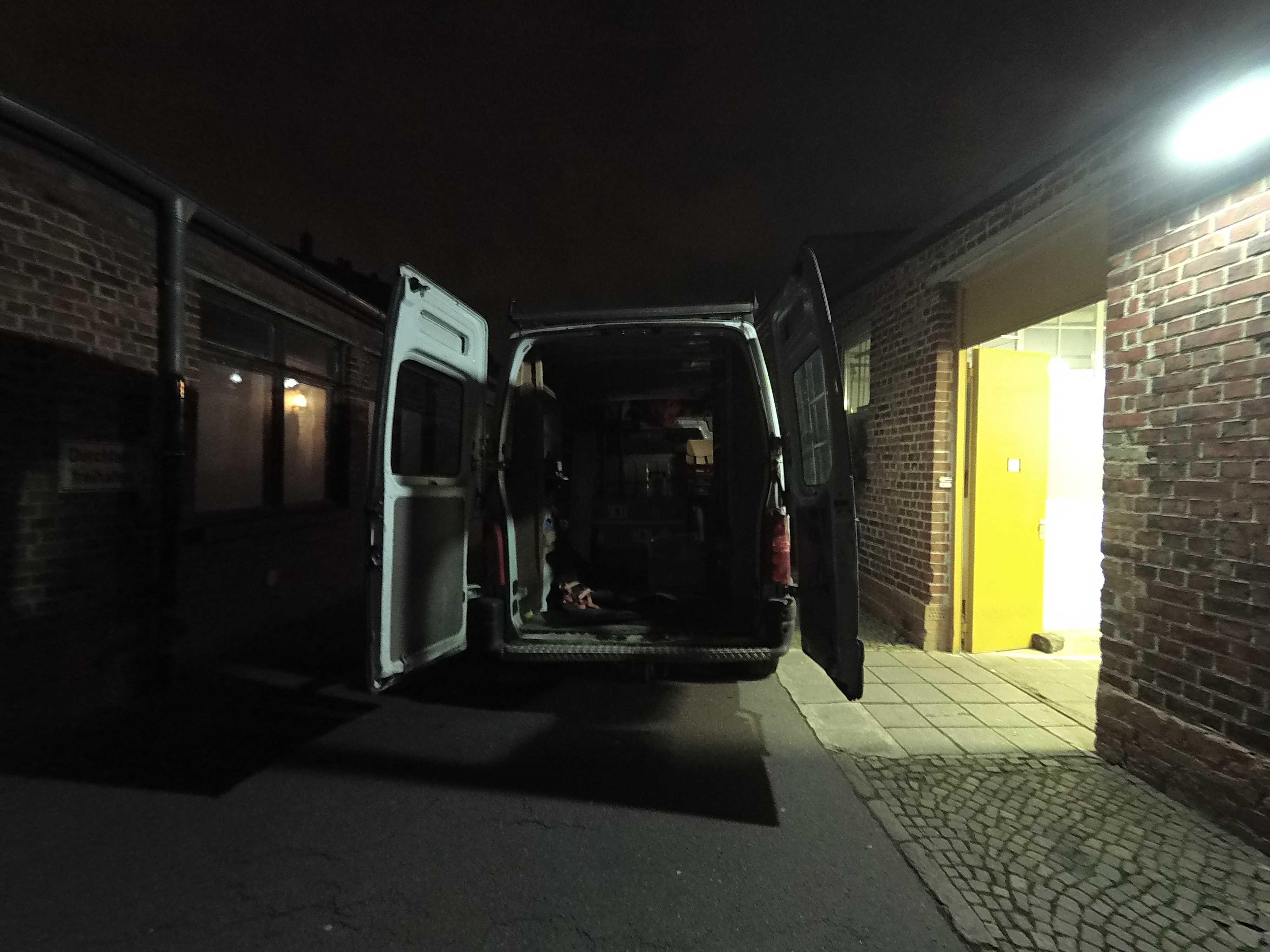 Their piece is a three-screen audiovisual installation using geolocation and weather data as parameters for the visualization. The vertices appear crisp on the 4K displays. 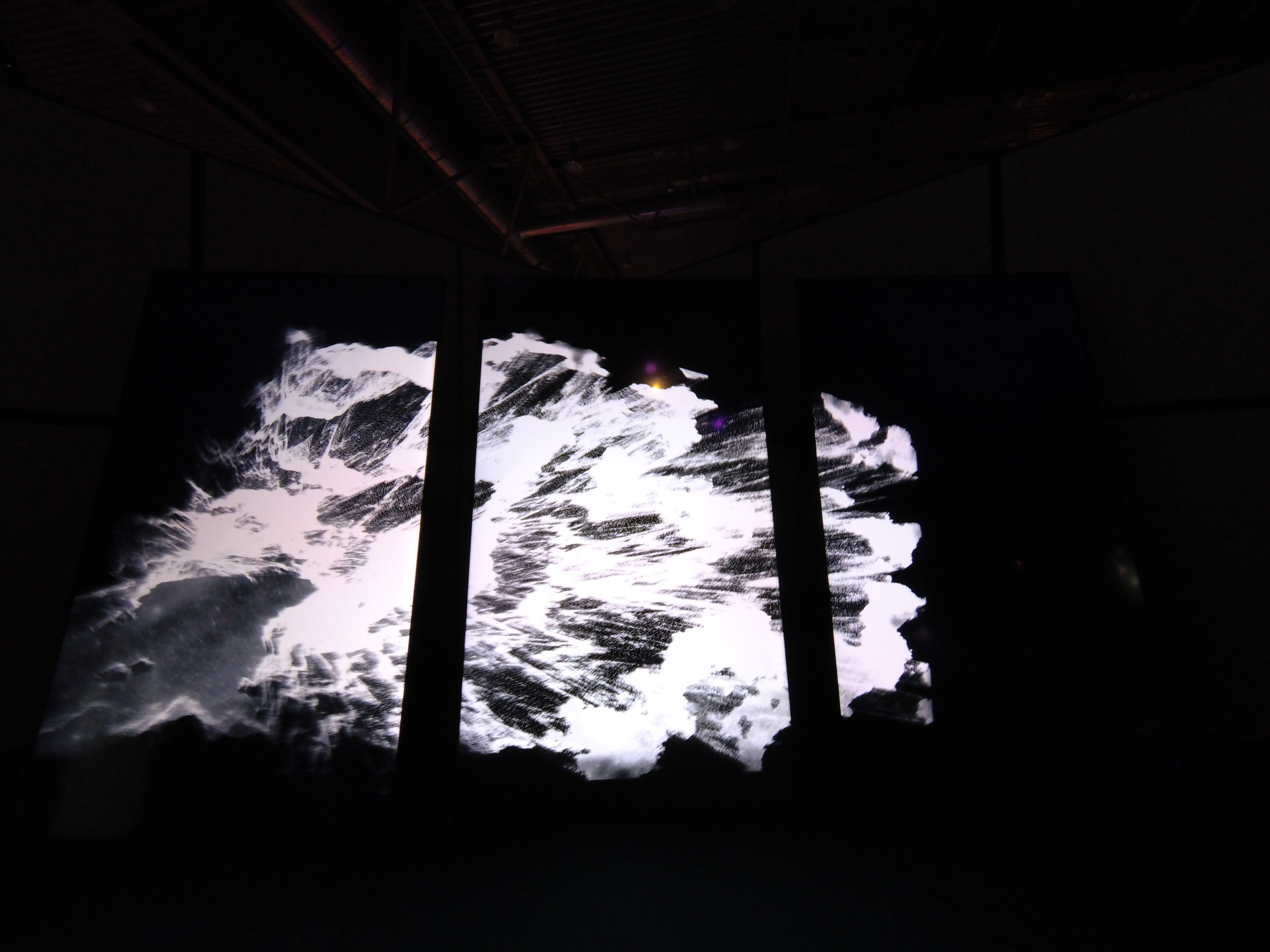 On the first day, I explored the Art and Play area. Experimental Stage Project was exhibiting a couple of installations. One of them was a rotating 3D printed sculpture with a strobe light that creates an animation effect. 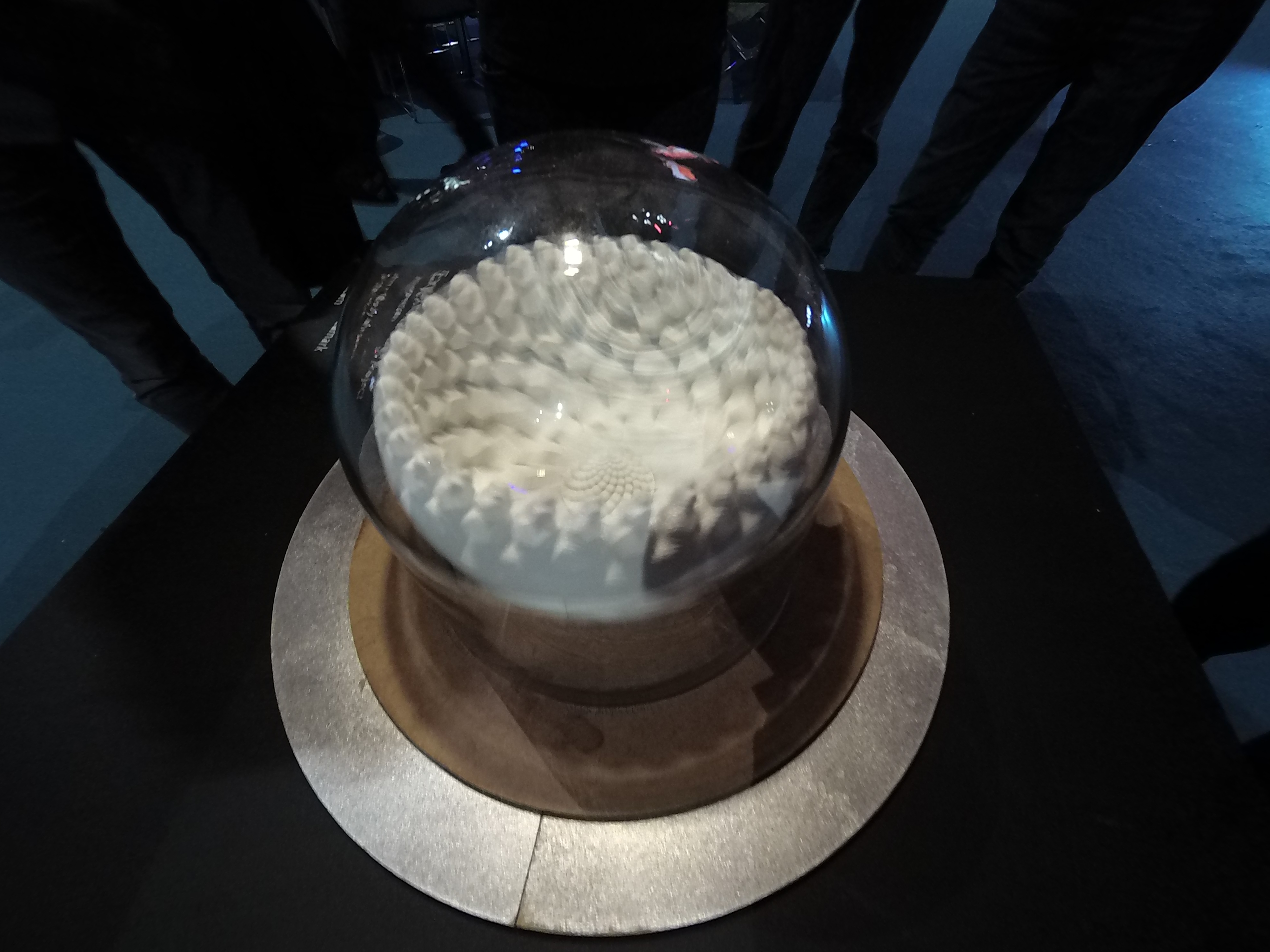 There is a small stage in Art and Play, and the separator of the stage is covered by a matrix of flipdot displays. According to the artist, they are originally used by the public transport company in Berlin, and they painted with a fluorescent color. 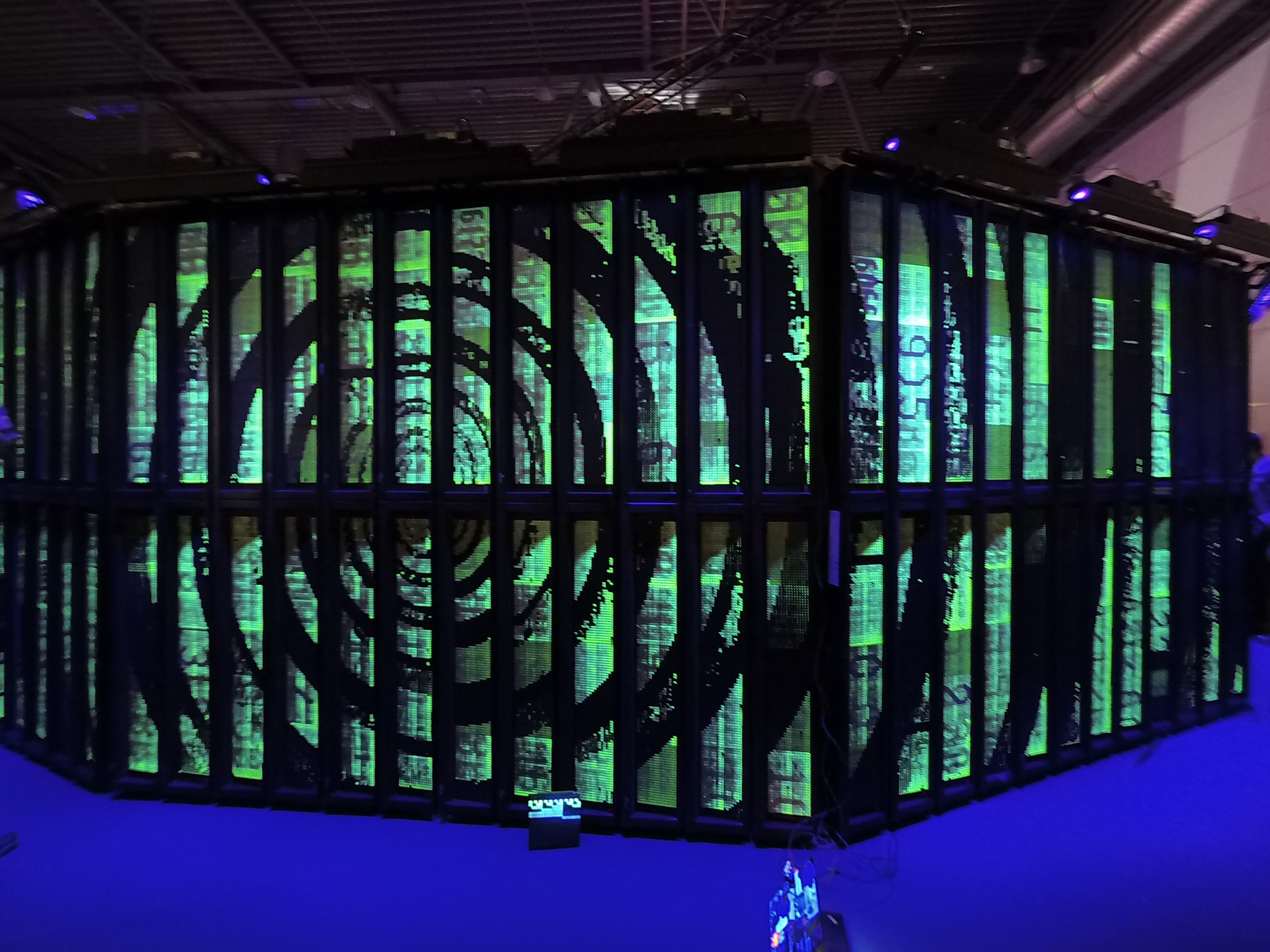 Another notable installation is Speculative Artificial Intelligence / Exp. #2 (conversation) by Birk Schmithüsen. There are two sculptures; one that listens to the environmental sound, and the system uses machine learning to create visual patterns shown on the other sculpture’s LEDs. 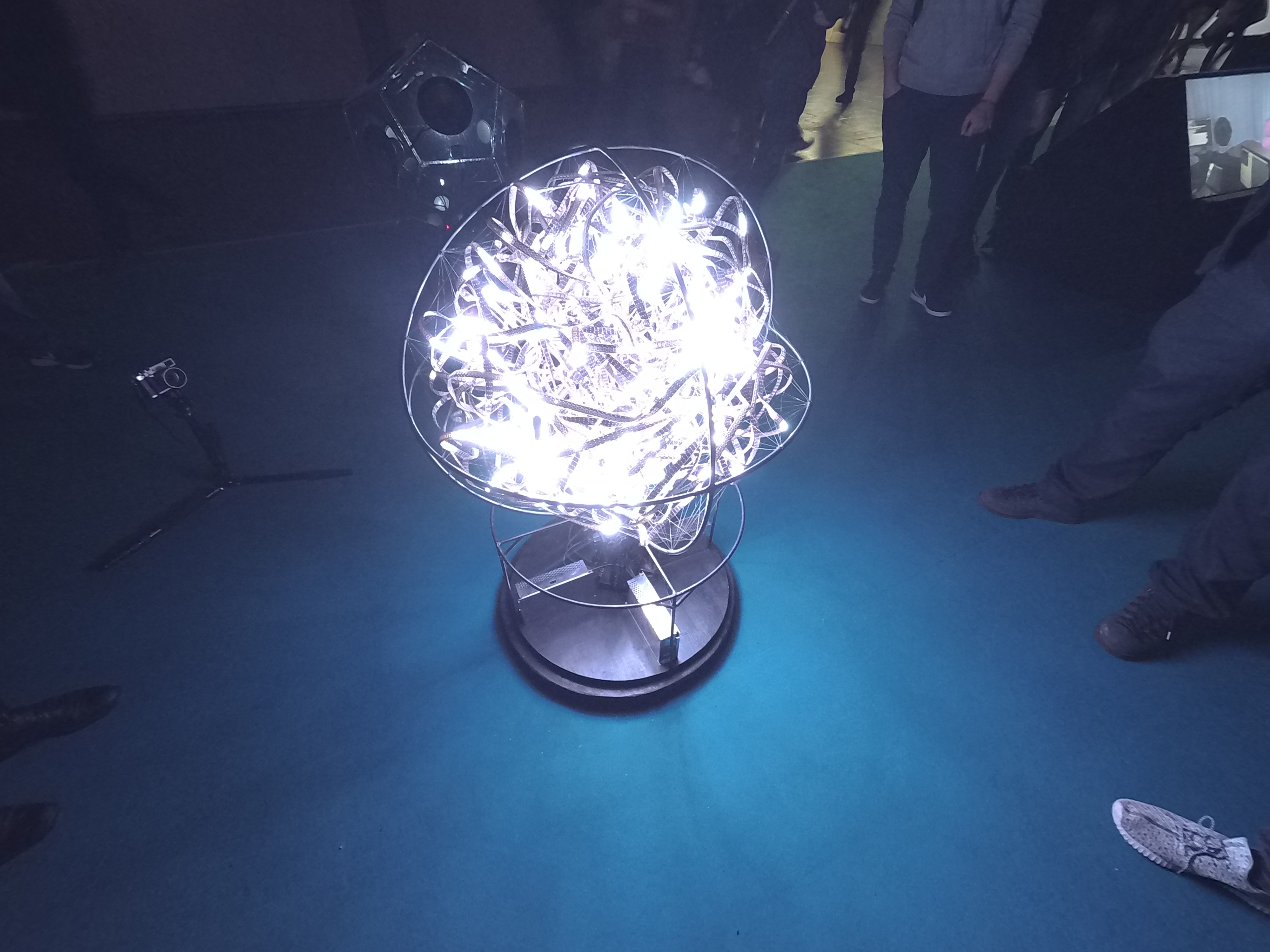 In the evening, I joined an informal artist meetup initiated by Jeanne Vogt and others. Jeanne is a media-art curator who I know from Choreographic Coding Lab in New York in 2015. She is a curator of the arts-and-culture track of the conference talks, and she was talking with another curator about one of their speakers who could not make it to the congress because of sickness. They casually asked me if I want to give a talk to replace her; I answered yes despite the slot is on the day 2, the day after, which is short notice. In fact, the last formal presentation that I gave was in January at tanzhaus, occurred in a similar situation as a replacement of another speaker. The only difference is that the previous presentation at tanzhaus was 20 minutes long, but this time I had an hour to present. Therefore, immediately after I went back to the accommodation, I started preparing slides based on the last presentation (and in the bed, I was dreaming of what to talk).

On the day 2, I spent most of the time preparing my slides at the speakers’ desk, which is a lounge for speakers for preparation. At the congress, it is difficult to find a place to work; there is no outlet or desk unless you are part of the assembly area, where people from various communities like maker- and hackerspaces are working on their projects. This is why there is a dedicated lounge for speakers with refreshments. 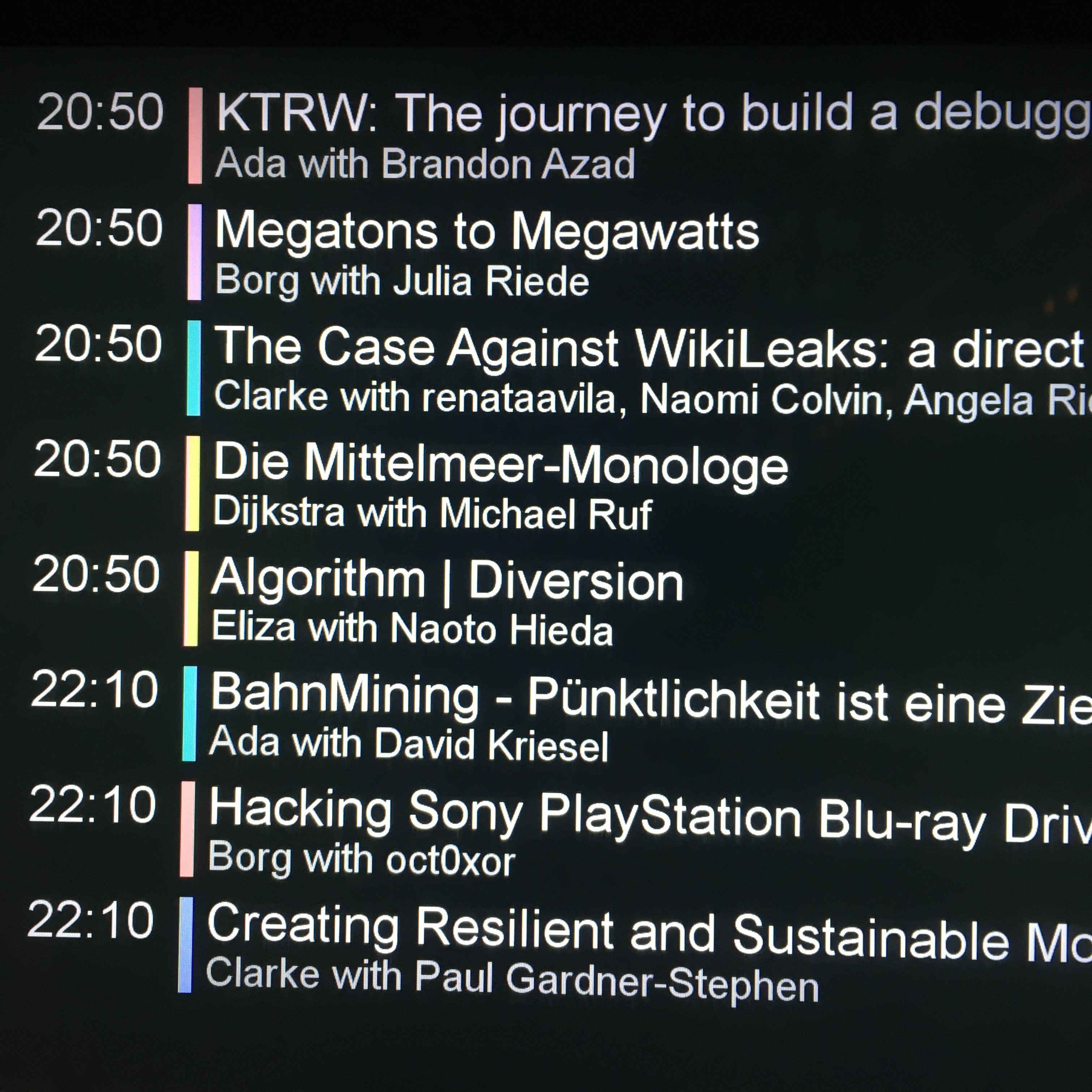 Conference schedule that shows my presentation

Although it was short notice, the presentation went well and I got positive feedback. At the congress, almost all the presentations are live-streamed and recorded, and you can watch my presentation here. I found it always difficult to summarize what I am doing to others in a few sentences, so it was a good opportunity to share my works and thoughts with my friends in this opportunity.

On the day 3, I saw an installation by Blausand, a media artist based in Cologne. I visited his studio before, and it was nice to see his projection mapping live. Egg cartons are hung from the ceiling, and 4 projectors are used for projection. He has been making custom tools for projection mapping with vvvv, which covers from projector calibration to video mixing. 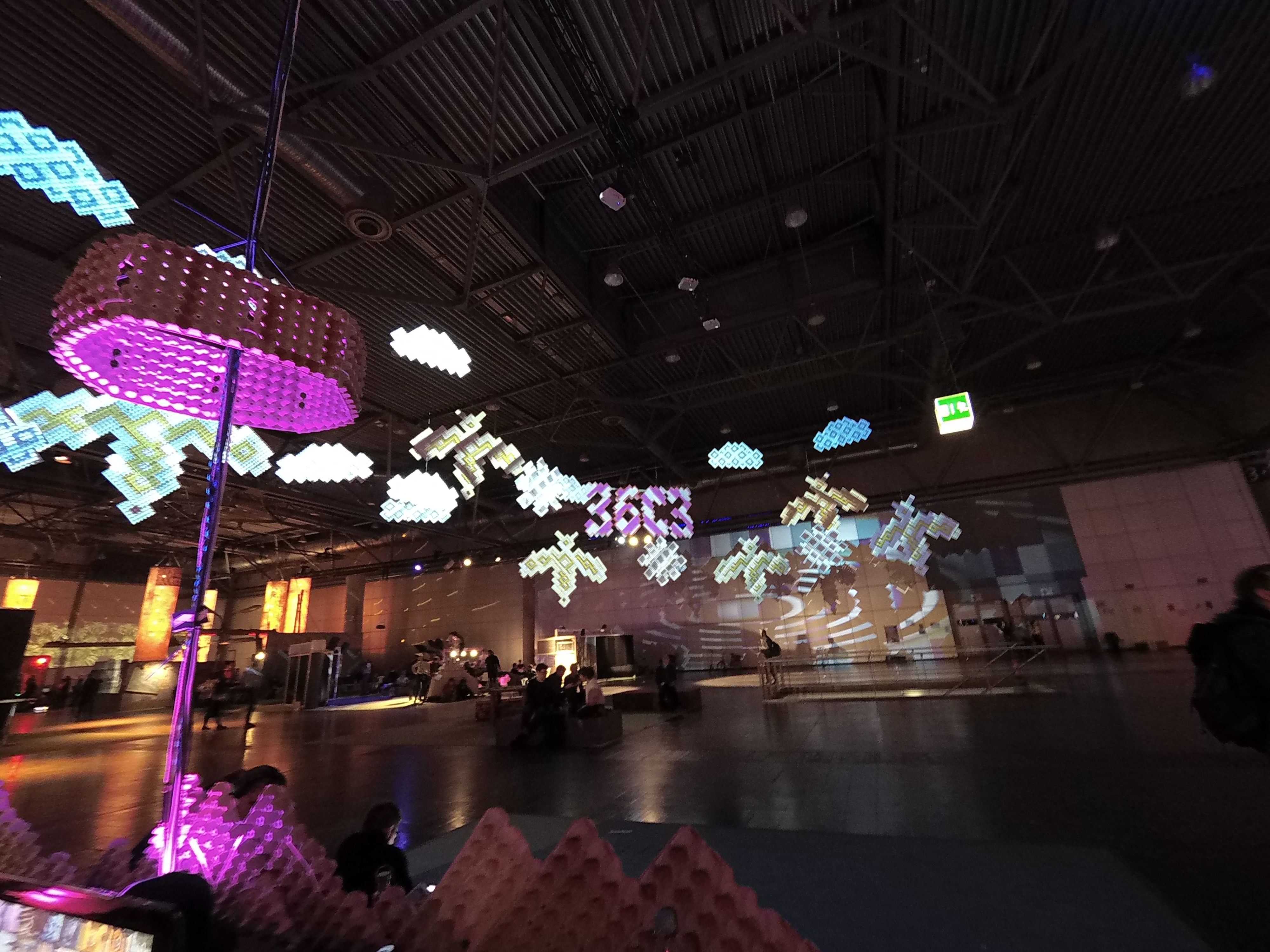 In the evening of the day 3, we partied hard till late. In the evening, there are numerous venues to dance throughout the congress. The main dancefloor is located in the opposite side of the entrance and has a huge bar area. One of the notable DJs was using hacked Gameboys to create sound and visuals. 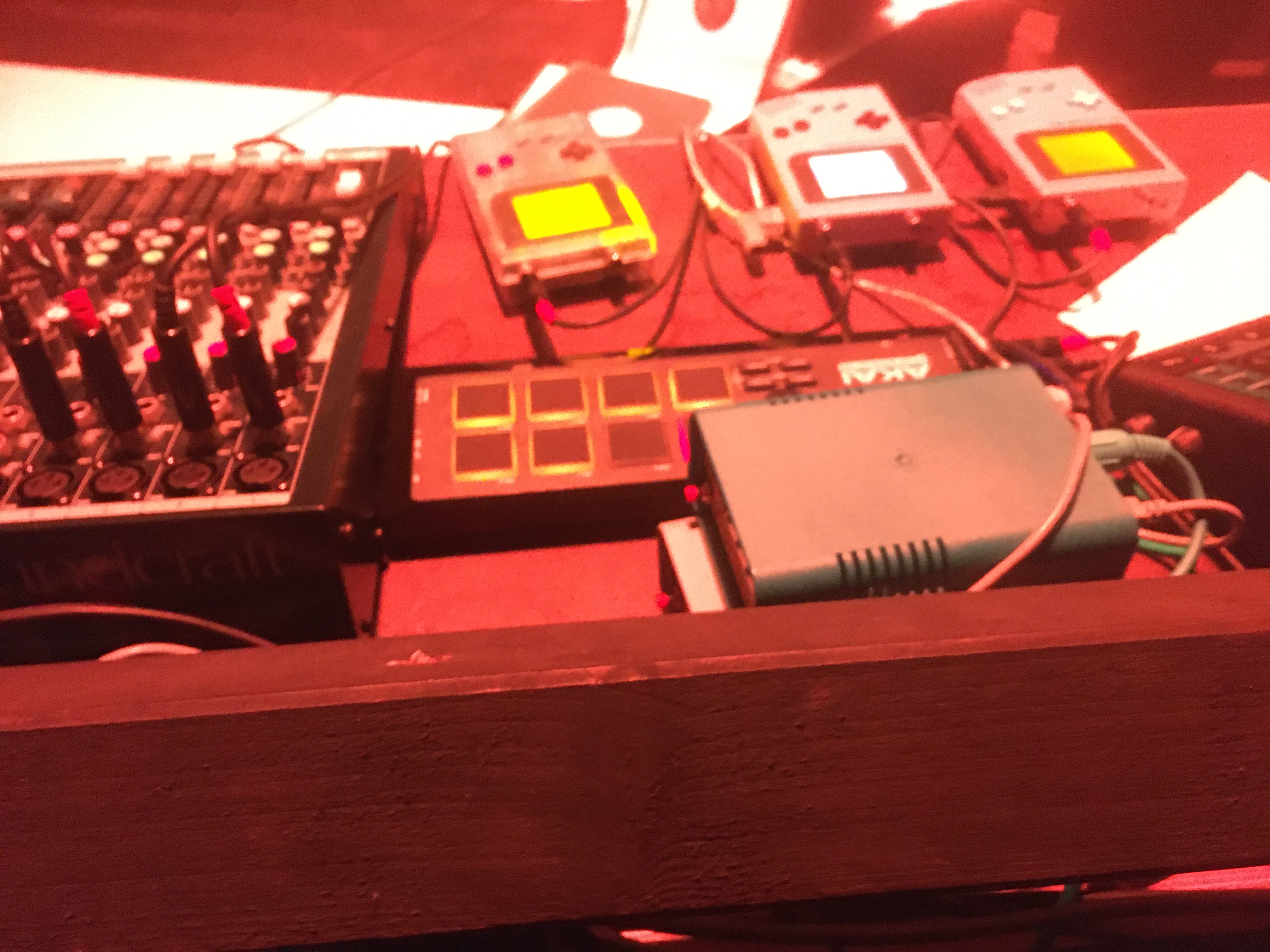 There was also a “phone-booth” rave outside the building; literally, it resembles a phone booth, a small structure that five to six people can enter, and speakers are installed on the ceiling. There are many more spaces to dance; what I enjoyed was a rave inside a tent. In the tent with “Free Hong Kong” flag, there was a DJ inside and people were dancing in such a small space being careful not to trip on the pipes of the structure. 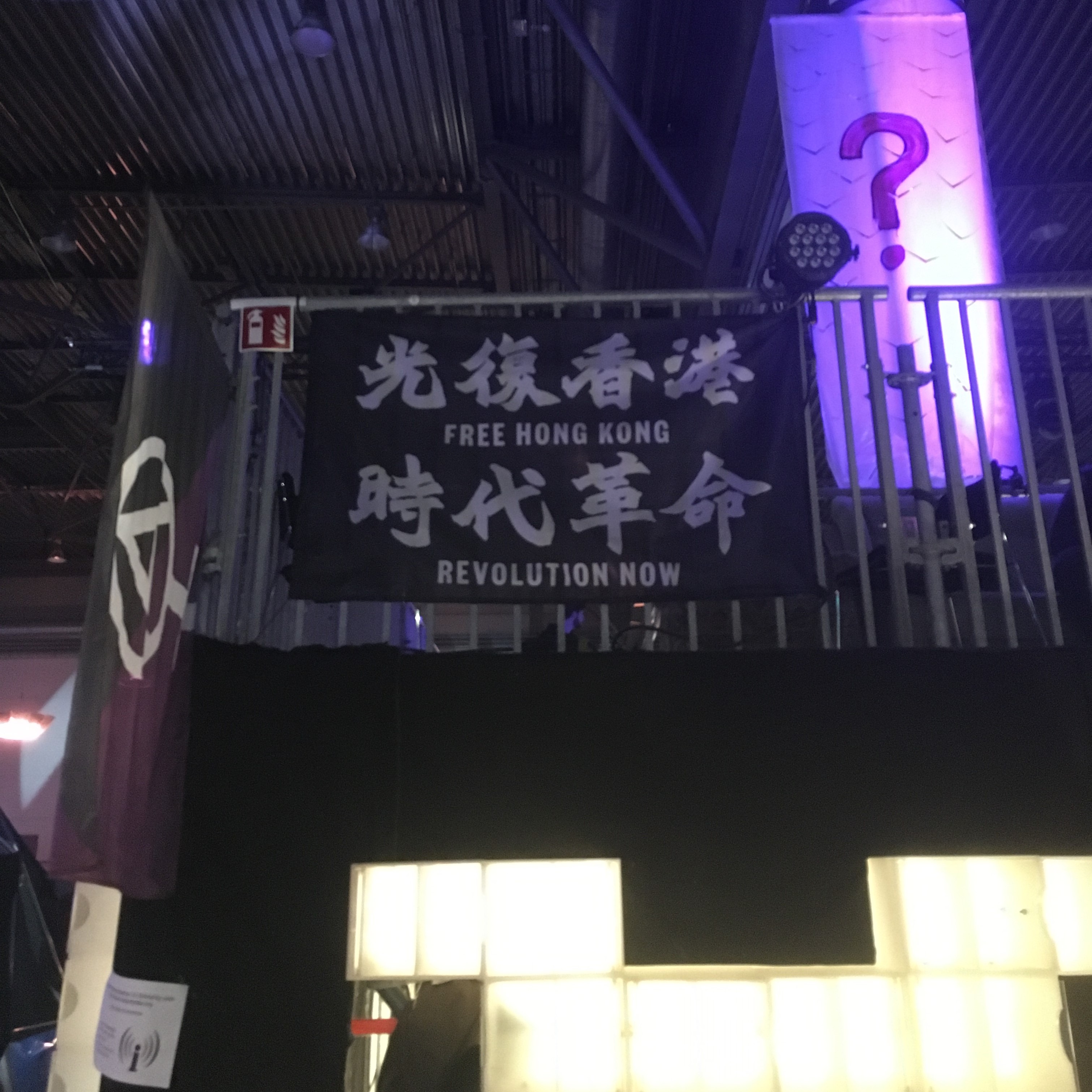 Also, next to the tent, a silent disco was taking place at Komona, where there were hundreds of wireless headphones.

The day 4 is relatively short as takedown starts at 6 pm. During the day, I went to Glory Nail, which is a small booth that you get nails done blindly. 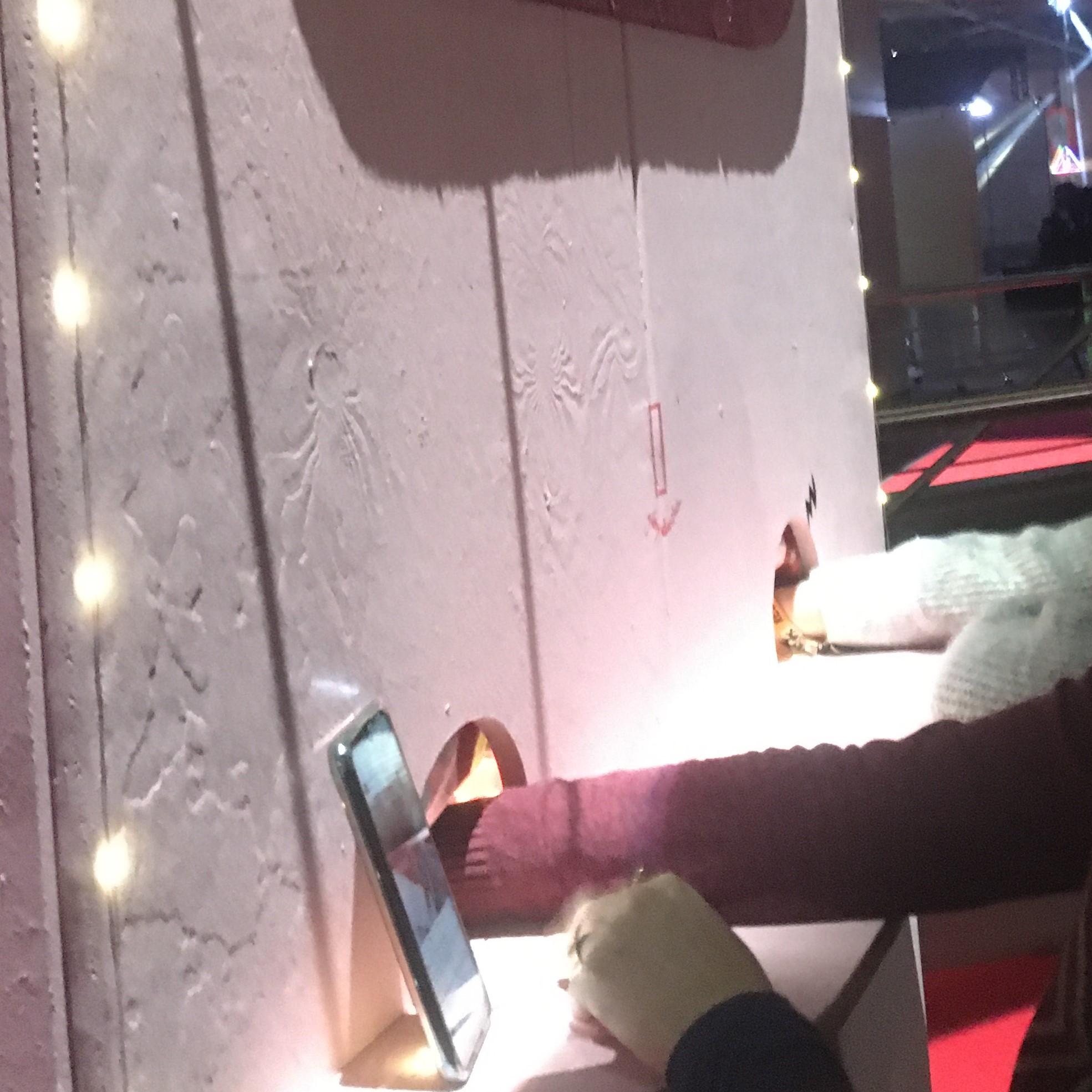 Since I already painted my nails before (in fact, I went to a feminist assembly table and borrowed some nail polish), they wrote some letters on my nails. A friend of mine, Liat, got a dot pattern on her nails. 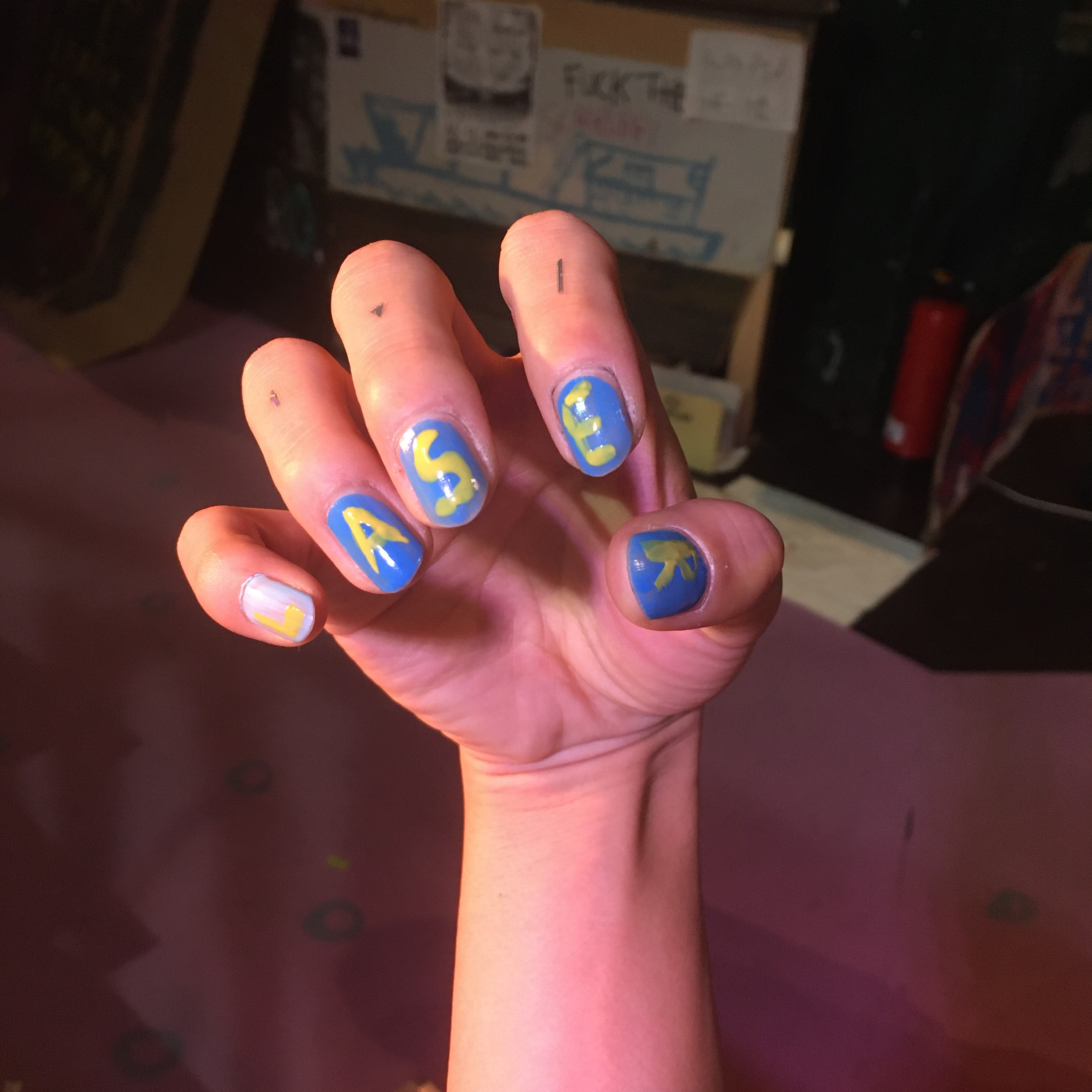 My nails written as LASER

During the congress, I mostly hung out with So, and without him I would not have idea which talks to attend. We also partied hard and my first congress became an unforgettable experience. There are many people I encountered and I would like to thank everyone I met for being kind, making me laugh, dancing with me, eating carrots with me, and creating a safe space to enjoy the event.