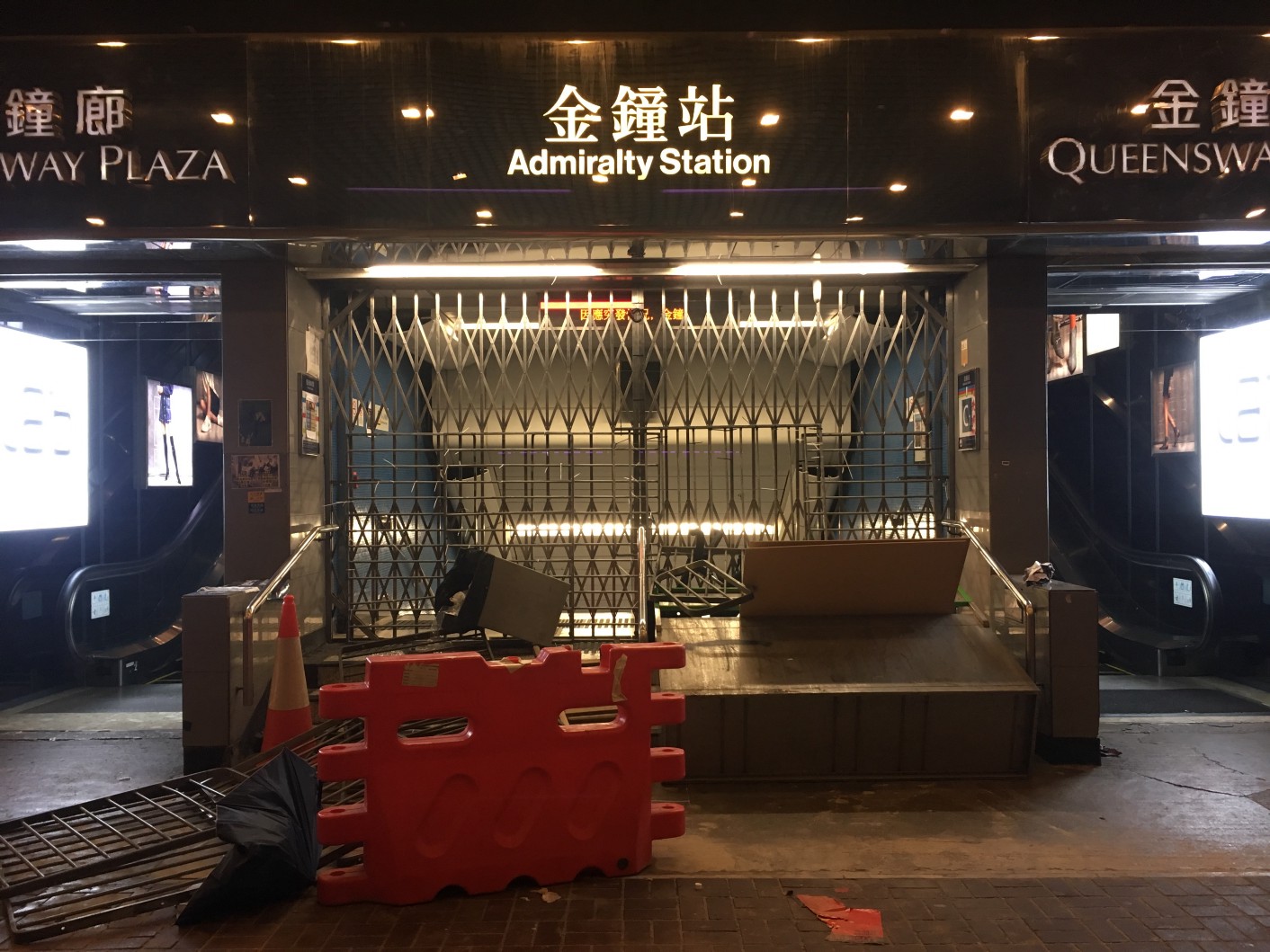 I was invited to the Hong Kong Academy for Performing Arts from September 16th to October 11th as a frame of Bauhaus year anniversary supported by Goethe-Institut and Bloomberg to continue Pathfinder project with Raphael Hillebrand. This is also an inaugural project of the academy’s dance-tech lab. In this article, I would like to address the political situation, which we faced during the residency, and I will write about the artistic and technical journey in a separate article.

The current protest began as a response to the proposed extradition bill, and the first major demonstration occurred in June. On September 4th, two weeks before our project started, the Chief Executive Carrie Lam retracted the extradition bill. However, Hong Kong citizens protest with a slogan “five demands not one less” - not only the retraction but including universal suffrage- thus, protests did not stop. You can read a better summary on BBC article.

I arrived in Hong Kong on September 15th. The academy reserved a shuttle bus from the airport to the accommodation for us, but the bus was canceled as the roads are closed due to the protest. Therefore, I took the Airport Express train instead to Hong Kong Station. The accommodation, a service apartment, is in Wan Chai area, which I needed to take the Island Line subway from Hong Kong Station. However, the stations were closed due to the aftermath of the protest, and taxi drivers seemed unwilling to take me. Thus, I had to walk for 30 minutes to the apartment.

The first two weeks of our residency at the academy finished peacefully. In fact, most of the protesters study or work during the weekdays, and they protest only on weekends. Since we were working in the studio during the weekdays, we did not have any interruptions from the protests although we saw placards prepared by the students in the elevator halls in the academy. Going out on weekends always involved risk because the subway services can shut down without notice as mentioned earlier. What is worse, streets can be blocked and on the way to the apartment, I often felt strong tear gas shot by the police. We were always told by the academic staffs not to wear black clothes because it is the dress code for the protesters. 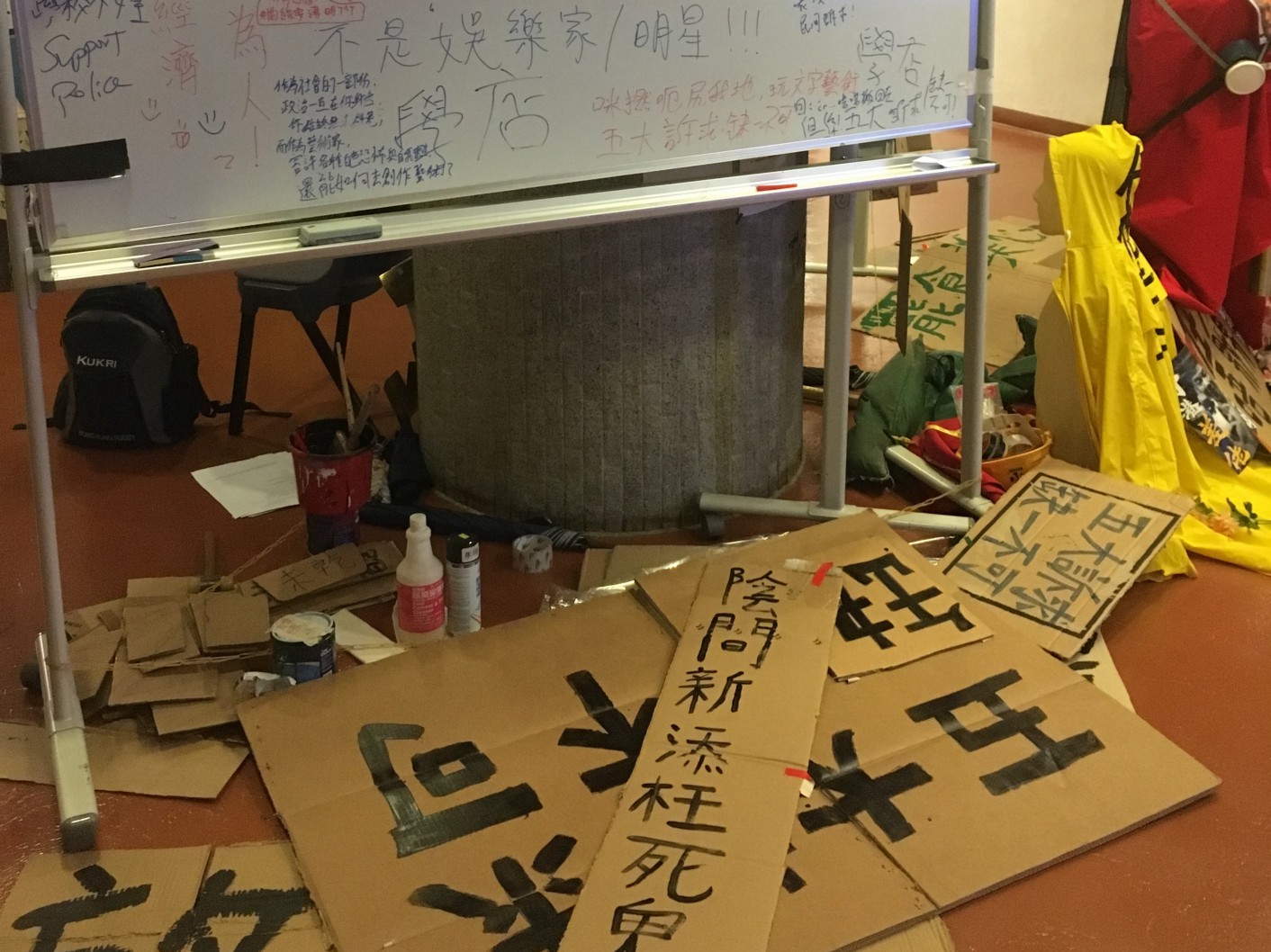 In the academy, placards can be found in many open spaces, saying “five demands not one less” in Cantonese.

HKMap.live is particularly useful to know activities in real-time. Although written in Cantonese, you can find, for example, police cars and water emojis to know where the police is and where tear gas is shot.

Also, for English speakers, I recommend Chilli Lucas’s live streaming. He gives concise English translation on the broadcasts of Hong Kong protests and other related events.

October 1st was a public holiday for the 70th anniversary of National Day of China. Since the protesters are against the Chinese government, massive protests were expected. I decided to go to Macau to have a break from the tense situation. Although Macau had a similar history to Hong Kong as a foreign colony, the reaction to the Chinese anniversary was totally different. There was no resistance to the mainland; throughout the city, people celebrated the day with huge banners and screens live-streaming the parade in Beijing. 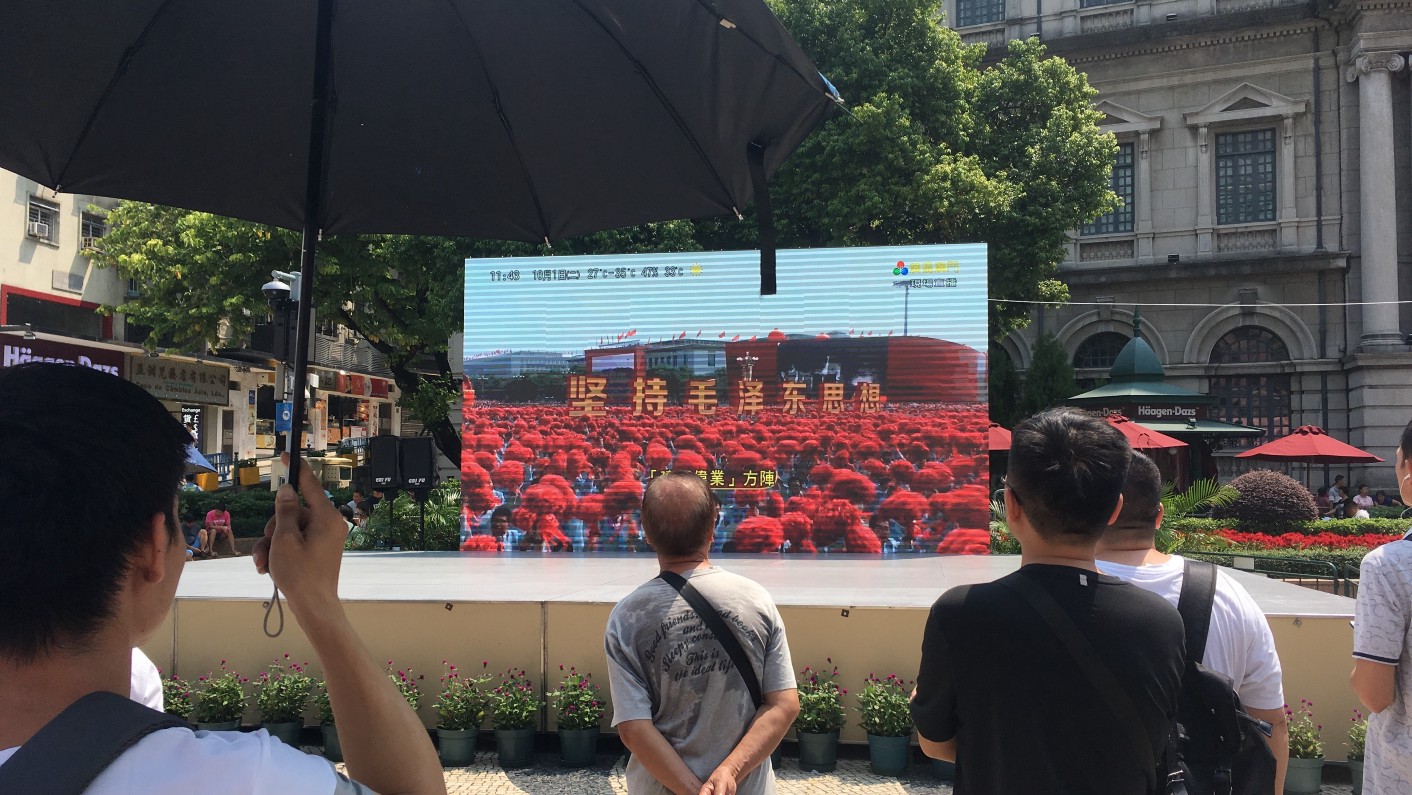 In Senado Square, Macau, a screen was installed to live stream the parade in Beijing

On October 4th (Friday), we were practicing with students for a showing on the weekend; however, more than half of the students were missing because they were participating in protests. On that day, the Chief Executive passed the anti-mask law under the emergency regulations ordinance, which escalated the protests. During the rehearsal, some of the academic staffs came to the studio and told us that all the students must go home immediately. And soon after, the showing scheduled on the weekend was canceled. On the following day, not only the academy but major shopping malls and all the stations were closed. The protest in the evening got particularly aggressive; on the following morning, I saw vandalized stores, banks and stations throughout Wan Chai and Causeway Bay areas. 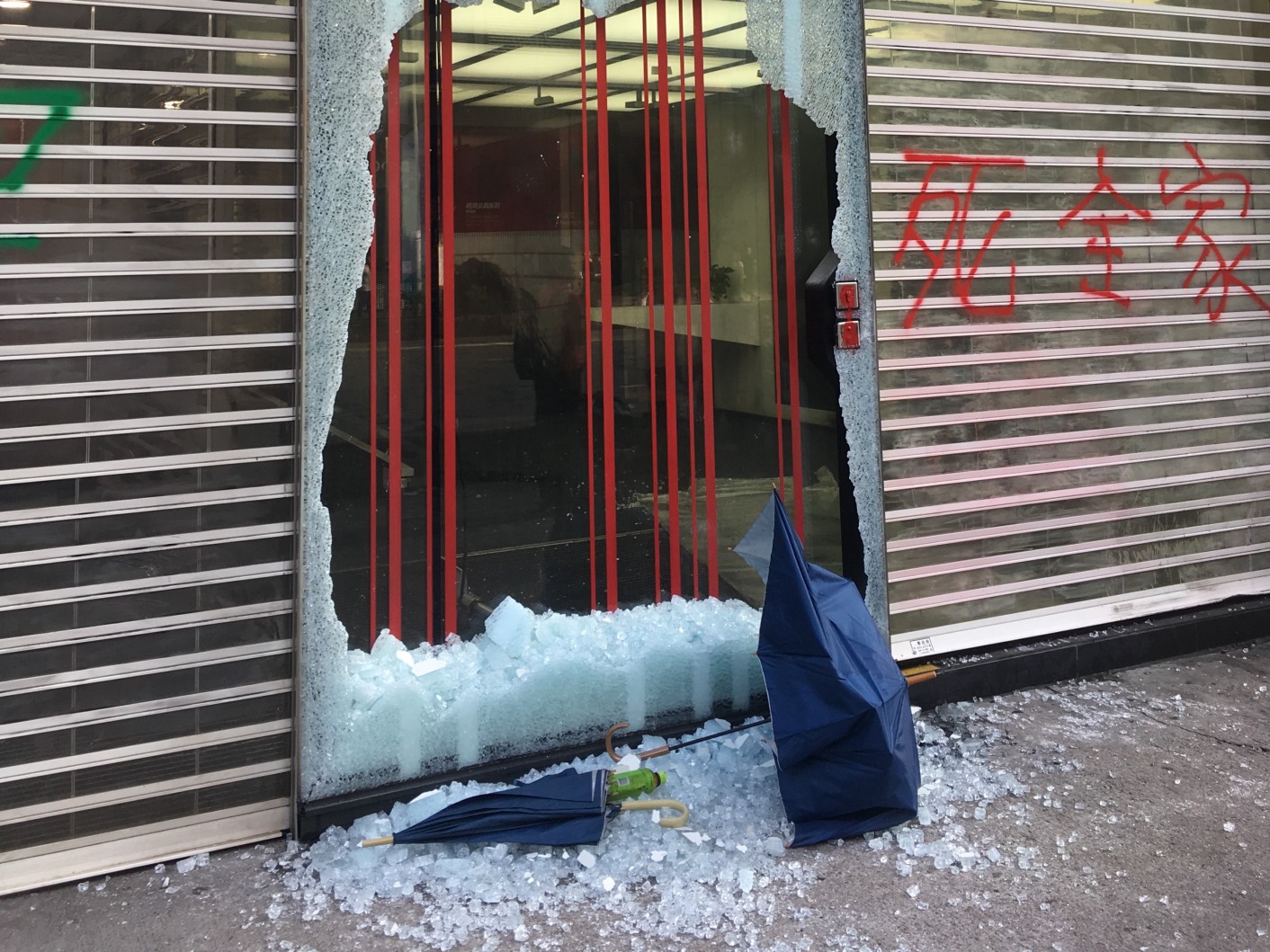 Vandalized bank. The protesters deliberately attack banks and stores related to the mainland

Most of the protesters are not aggressive; they gather and march peacefully. However, the police regards the march as an “illegal assembly,” arrests people and uses tear gas (and in the worst cases, they shoot the citizens with live rounds). Compared to the riot police, protesters are usually not equipped. They shovel bricks from the streets and throw at the police, which is obviously not effective. Because of this, it is common to see a makeshift paved road filling the missing bricks. 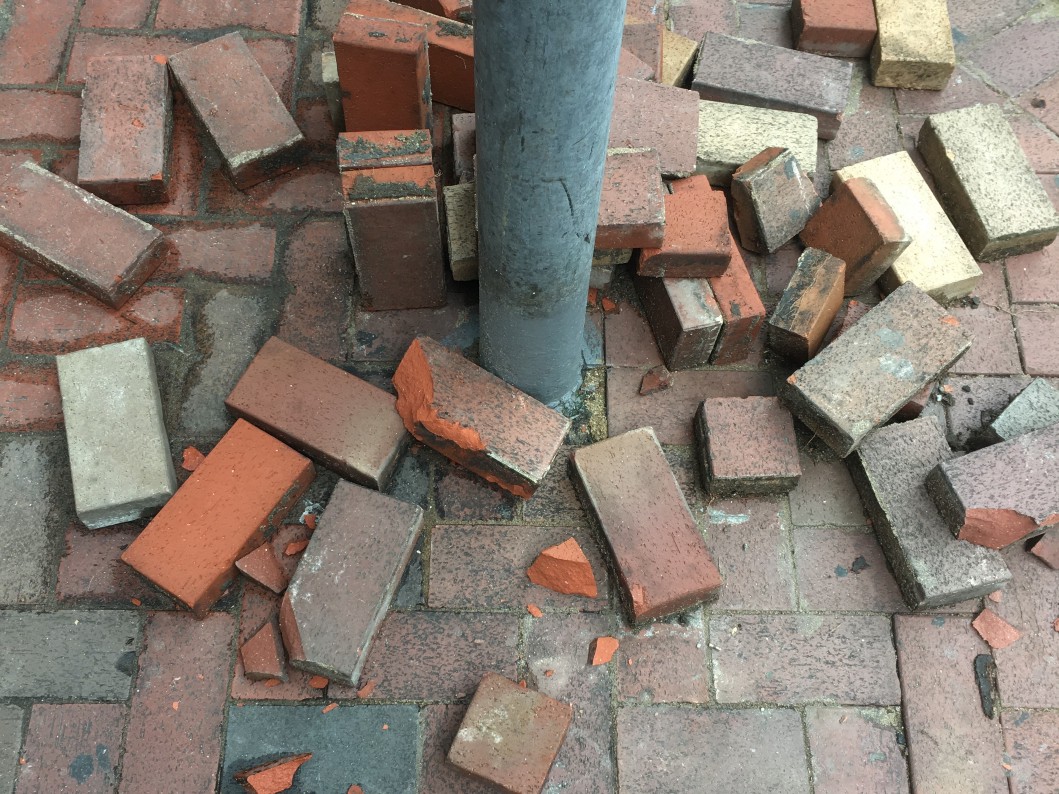 Bricks on the street

On the same weekend, October 6th, we decided to participate in a demonstration. We joined a march on Hennessy Road in Causeway Bay, but soon it was stopped by the police; tear gas on the front line was enough to stop the march because the whole crowd has to move backward. In these cases, Hong Kong protesters developed some hand gestures to spread messages, such as to go back or first aid is needed. Nevertheless, the fear is that we do not know what is happening on the front line. 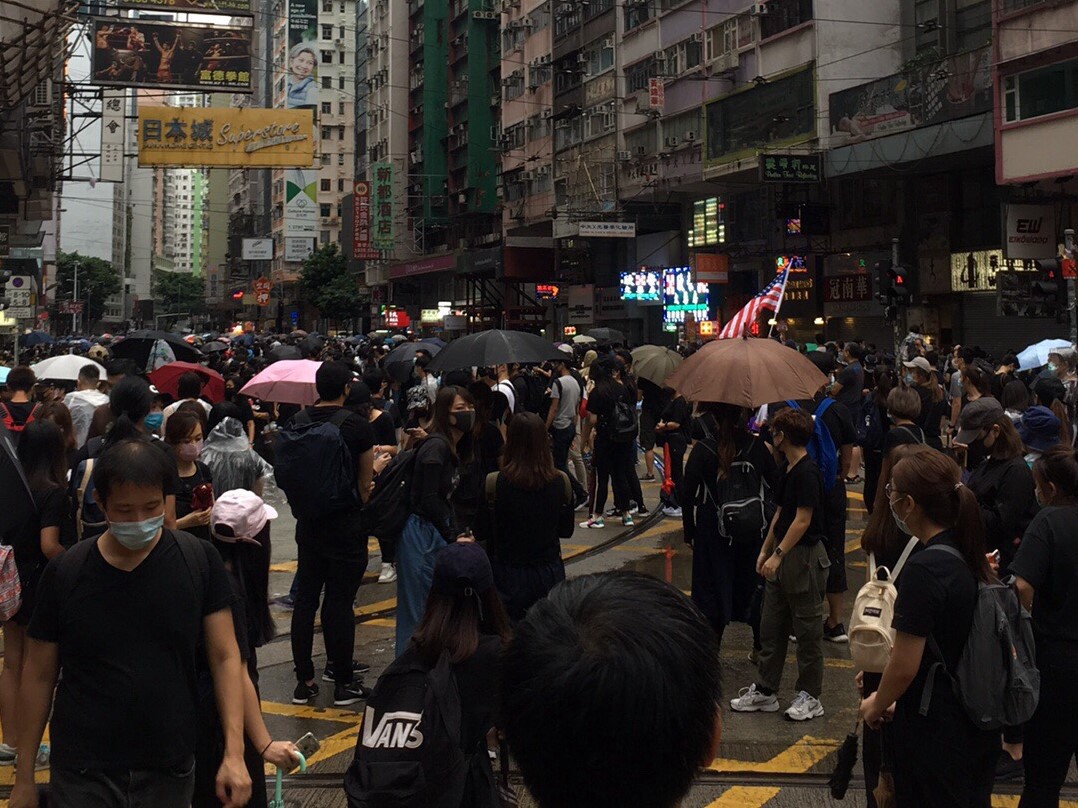 A demonstration on October 6th in Causeway Bay

The fourth and final week of our residency was rather quiet, and on Thursday and Friday, we performed our works as scheduled. The Airport Express train was operating without disruption so I had no problem going to the airport. Nonetheless, protests are ongoing and more people are injured and arrested by the police. When I first arrived in Hong Kong, the situation looked surreal, but as I know the city and get close to the people in Hong Kong, it was obvious to me which side I support.