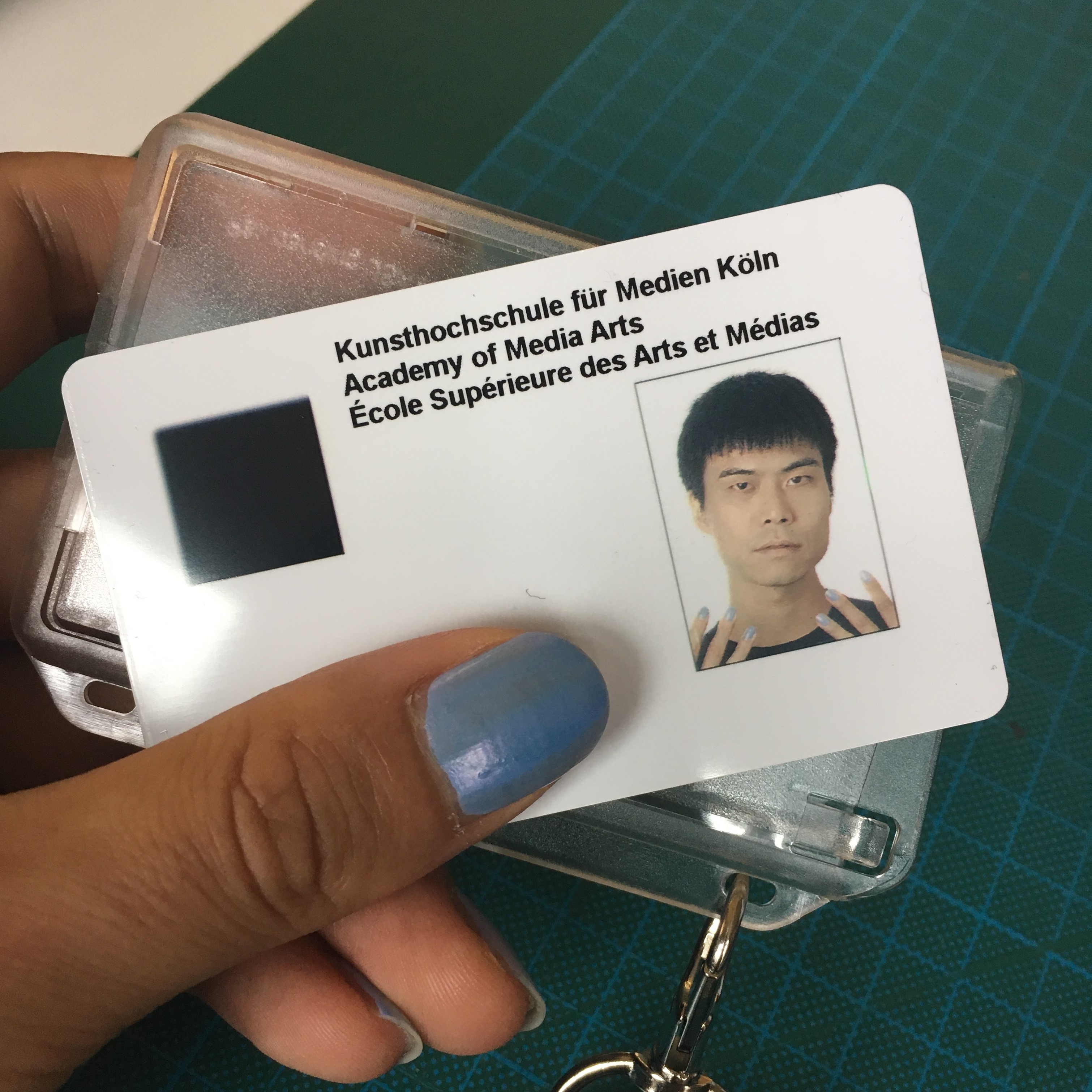 It has been four month since I entered the Academy of Media Arts Cologne (KHM) in October 2019. As I finished a seminar showing, I would like to do a recap of the first semester.

I took 3 Fachseminar (technical seminars) this semester. The first one is led by Phil Collins about performing arts. According to the syllabus, the seminar is about the history of African-Americans and I was not sure about the topic, but it turned out to be highly critical for my work. During the seminar, we watch a film either from Phil or about African American figures, such as Malcolm X and Black Pather Party, as well as underrepresented figures like Audre Lorde. The screening is followed by a short discussion. Between the seminars, he offers us with reading material. Also, we had excursions to Bonn, Wuppertal, and near Brussels to watch dance pieces by Pina Bausch and Rosas (I personally enjoy watching Pina’s pieces from my autistic perspective of preferring repetitions and twisting the relations of movements and emotions - but at the same time I often feel uncomfortable because of heteronormativity). Since there are not many contemporary dance people at KHM, I enjoyed having a safe space in this seminar.

Creating Sound by Tobias Hartmann is focused on archiving sound recordings, but also the seminar picked up specific topics that students are interested, for example, vocoder and spatialized sound. To me, rather than the seminar itself, I found it helpful to ask Tobias for advice; he recommended me to implement, for instance, a phase-modulation oscillator and a feedback loop filter, and I tried these ideas on Web Audio. The latter is implemented on p-code clone, which was used in the performance described later. During the seminar, after explaining sound editing techniques, he once said that what is important is not the techniques but how you want to present. It can be a live performance or an automated performance that you only need to press the start button, but you are the one making a decision. This helped me framing the work to present everything online and research algorithmic sound.

A seminar led by Ubermorgen (lizvlx & Hans Bernhard) and Sam Hopkins has two programs biweekly; one explains how the Internet works, and the other is a podcast with a guest speaker followed by a Q&A session. This semester’s podcast episodes will be available next autumn, but meanwhile the last semester’s episodes can be found here (in English). The episodes I enjoyed the most are Diana McCarty (I wrote about her on the article about Transmediale) and Leo Impett, who is researching computer vision and art history. I had an impression that he was referencing to linguistics as a ground truth for machine learning (I have to apologize that I did not take notes and I need to listen to the podcast again), so I questioned about the mapping of words to high-dimensional space. As I am on the autism spectrum, I have hard time finding the right words when I talk or write. He asked me if I cannot relate ideas to words or if the words simply do not exist. At the time, I thought it was the former, but I still cannot find the answer. Besides the seminar, Hans has been a good mentor, giving advice on my creation as well as on the student life working as a freelancer. 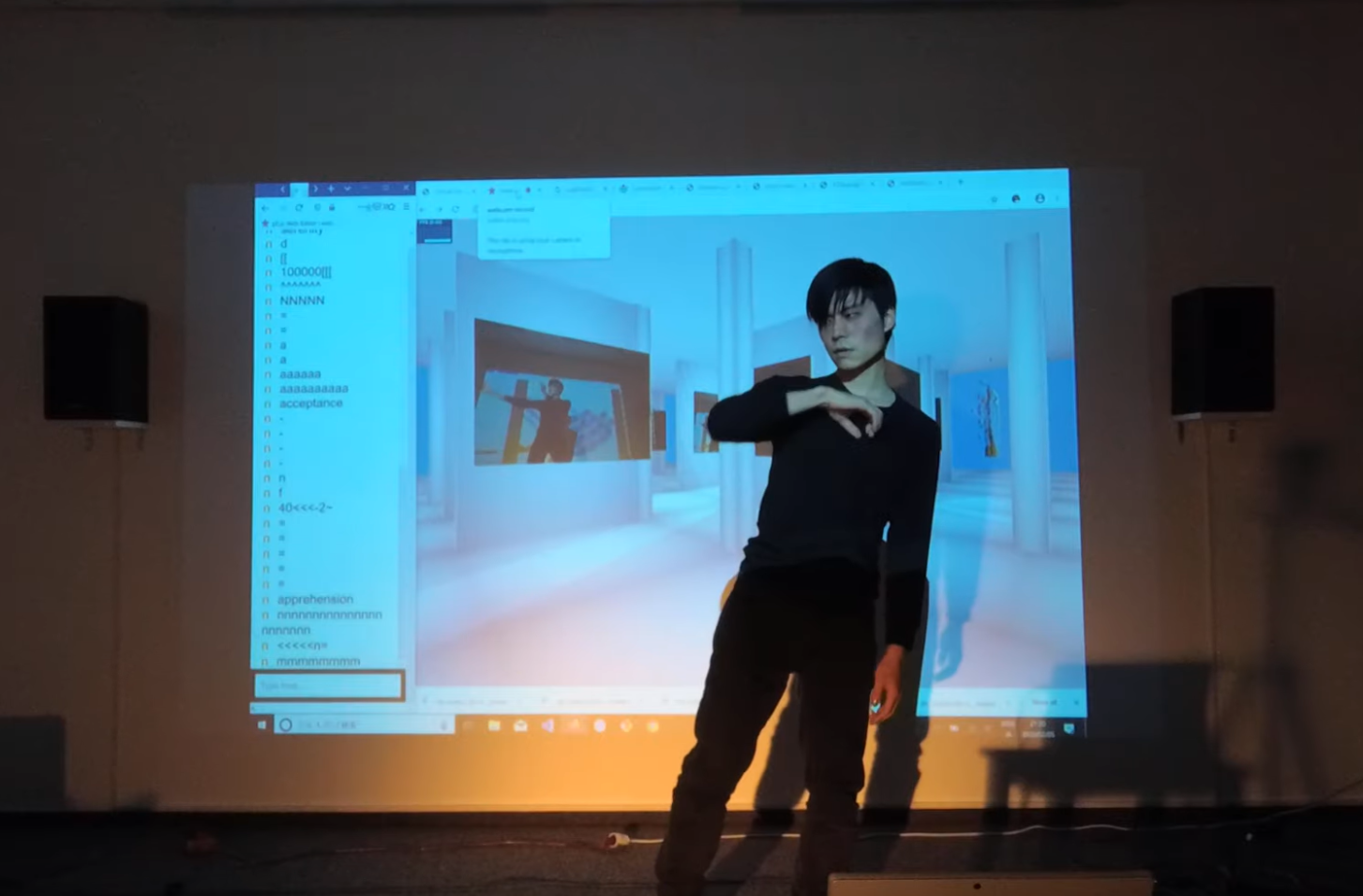 Me performing at the seminar showing

We had a showing at Phil’s seminar, and I did a performance. Since it was announced last minute and I was at a symposium in Berlin, I only had a day to prepare. As I know that it would not be productive to code new contents, I decided to combine work-in-progress projects. I already had a solid concept that is to relate crossmodal information such as images, sounds, movements and words from an autistic view and to create a virtual exhibition (or an archive) on the stage. Based on the daily movement practice from last year, I recorded my movements on the stage with a webcam (in webm format) and uploaded the videos to the virtual gallery, which I also made last year. To relate the movement to an image, I used Google image search to find an object and projected as a backdrop. Despite technically a simple way to pick an image, it went well as the audience can easily understand what is happening. I decided not to verbally explain the performance on stage to differentiate from performance-lectures I did in the past. Instead of speech, I used the chat version of p-code to type what I wanted to explain. Although I was performing in the same space, my words are sent to the Internet, shown on the projection and translated into sound as live-coding based on p-code syntax. I used to use less elements and to keep the setup minimal, and I often failed to convey the ideas. Instead, this time I bombarded the audience with projects that I am currently working on, hoping that some of the ideas can be picked up. Although I did not feel nervous as I am used to be on a stage, I felt vulnerable to perform because it is a highly personal piece. Furthermore, I am not used to perform a solo piece and to be fully responsible for it since I have been collaborating with other artists for the last projects. Nevertheless, I am glad that I received positive comments and feedback for the next iteration. I was debating if I should write down these notes while the piece is still in its alpha phase, but I decided to write because my policy is to open-source the code, contents and concepts.

During a presentation at the Processing Community Day Tokyo, a friend of mine described his master study at IAMAS to be in exile (as it is in a remote city in Japan far from Tokyo), and this also fits my current study in Cologne to some extent. There are schools such as UdK (Universität der Künste Berlin) and HZT (Hochschulübergreifendes Zentrum Tanz Berlin) in Berlin, which could have been my options, but I decided to come to KHM (since I did not apply for other programs, if I did not pass, I would have remained in Japan as a freelancer). At KHM, students do no have a fixed mentor, which works well for me as I research on different directions such as performing arts, sound and Internet art. Also, it is good to have a distance from Berlin to be not fully influenced by the mainstream media art scene.

Outside the school, I was involved in the project at tanzhaus nrw in Düsseldorf (article in Japanese), and therefore, I missed most of the seminars in December and early January. It was a collaboration with Hochschule Düsseldorf and we are continuing the collaboration for other projects. Also, in May, I am going to give a workshop at Meta Marathon about coding and weaving. There are more gigs to come, and I am willing to share them as soon as the information is publicly available.

On Twitter, I posted about the generous art funding in Germany compared to Japan, and a friend of mine asked me what are the advantages and disadvantages. I think, of course, there are plenty of advantages. For artists producing their work, it is always good that there are some funding available as well as technical support from companies and schools, such as Hochschule Düsseldorf, mentioned above. However, for an artist working for other artists as a freelancer, as in my case, it is similar to commercial projects in a sense that I need to deliver what I am asked for. Of course, there are some artistic decisions that I make, and I do enjoy the process, but sometimes the situation can get tense. Also, commercial projects pay significantly better than cultural projects. The reason why I prefer to work on cultural projects is to be in the media art scene for networking so that one day I can find an opportunity to show my work. Therefore, currently I collaborate with others to get to know curators and artistic directors, and I use other time to research and develop my projects. However, what really can be a disadvantage is that often I am satisfied with collaborative works and make it an excuse not to do my own research. This can be a trap if I spend no time for my research and creation because, in the future, I do not have a piece to show when I get an opportunity. Once Hans told me that I need to count hours of the collaborative works as well as my own work, which I think is a good way not to exhaust myself for others.