Cellular Body (No Time To Fly) 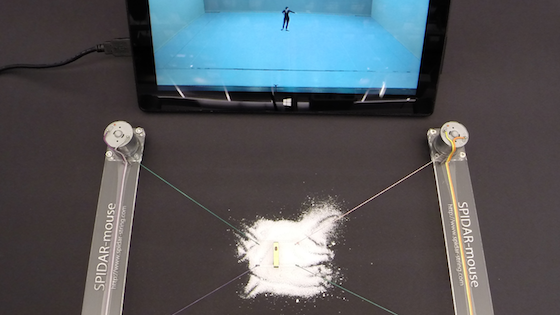 At the 4th Choreographic Coding Lab (New York City, 2015), the participants were provided with motion data and videos of No Time To Fly (2012), choreographed by Deborah Hay and performed individually by Jeanine Durning, Juliette Mapp and Ros Warby.

Deborah's choreography score consists of questions, which makes each dancer perform uniquely. Extensive research has been done on each dancer's motion, particularly, the travel path to understand their movement characteristics by Florian Jenett and others.

In response to Deborah's comments, I decided to build a real-life particle system as a metaphor for a cellular body. Since visualization of the body movement has been done already, I focused on interpretation of the choreography in a different dimension, real-life particles. Particles are scattered by SPIDAR-mouse, originally designed as a haptic device but modified to respond to dancer's movement. Several kinds of material are tested: flour, ground seeds, ice, sugar and black glass pieces, and I ended up using glass on white paper and sugar on black paper with videos performed by Jeanine Durning and Ros Warby, respectively.

As for implementation, the dancer's position provided by Motion Bank is input to a Kalman filter to compute a smoothed velocity. A force proportional to the velocity is applied to a pin by the haptic device to scatter the particles. The position of the pin is not measured by the system and is affected by the applied force, the size of the device and friction between the pin and paper, which blurs the correlation between the performer appears in the video and pin movement.

Thanks to the organizers of the Choregraphic Coding Lab, and special thanks to all the participants at CCL for giving me valuable comments.