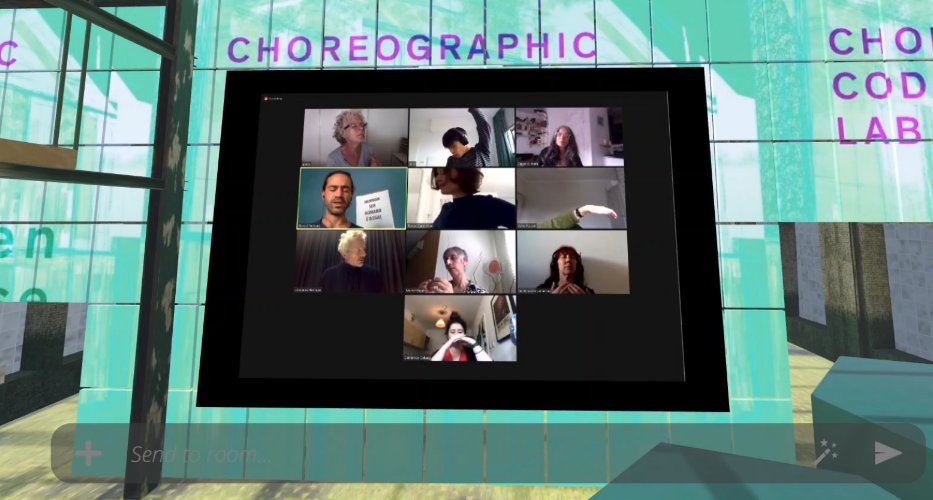 I was invited to NODE20 in Frankfurt as the organizer of Choreographic Coding Lab Online (CCLOnline). As a background, I met Jeanne Vogt the director of the NODE festival 5 years ago at the 4th Choregraphic Coding Lab (CCL) in New York. She was one of the organizers, and as a participant, I enjoyed the 5-day coding and dancing jam, meeting people from contemporary dance and computational art. During the lockdown, I organized a weekly unstructured meetup named Choreographic Coding Online to make a space for people to discuss and to experiment new ideas in networked performances, inspired by but independently of the CCL. Jeanne came to one of the meetups, and later we decided to make another version at NODE20, which took place in GreenHouse NAXOS, a virtual playground of NODE20 built on Mozilla Hubs (huge thanks to Gloria Schulz and Katharina Held for realizing the project).

Therefore, I became the curator and the organizer of CCLOnline. The original CCL format is a 5-day meetup for people to meet and to collaborate, CCLOnline lasted during the festival week with a series of meetups, performances, discussions, exhibitions and lunch sessions run by different artists I curated, which I introduce them later in this post. While it is named Choreographic Coding Lab Online, the scope is not limited to choreography, dance and coding. I see that every online encounter has a performative aspect, and thus I included lunch sessions in the program as well. What was important for me is to create a safe space for everyone who is coming from NODE20, from my personal network or from a coincidence; CCLOnline is independently organized of NODE20 and it is open to everyone outside the festival. To make an online safe space, I invited artists who I worked frequently during the lockdown. In other words, CCLOnline is very personal and can be interpreted as my wrap-up of the year 2020.

Though the events are listed on the official program and official app (Talque), I created a website on which visitors can see the CCLOnline program at a glance, and it turned into an archive by adding video links after the festival. Started and organized by Raphaël de Courville, an artist and an interaction designer in Berlin, Low Frequency Skies (LFS) is a daily lunch session open to everyone to join. The idea is simple; the room opens at 12:30 on jitsi for one hour, and people can join anytime, whether they are cooking, eating or just willing to chat with people. Since it started in March, a few of us ended up attending almost daily until LFS ended in June as people started to work in offices again. I proposed to make a revival of LFS, and Raphaël and Taru Muhonen kindly agreed to be part of us. We had 5 sessions during NODE20; at first we met in GreenHouse NAXOS (picture above), but as it is computationally demanding, we later moved to the original jitsi room. 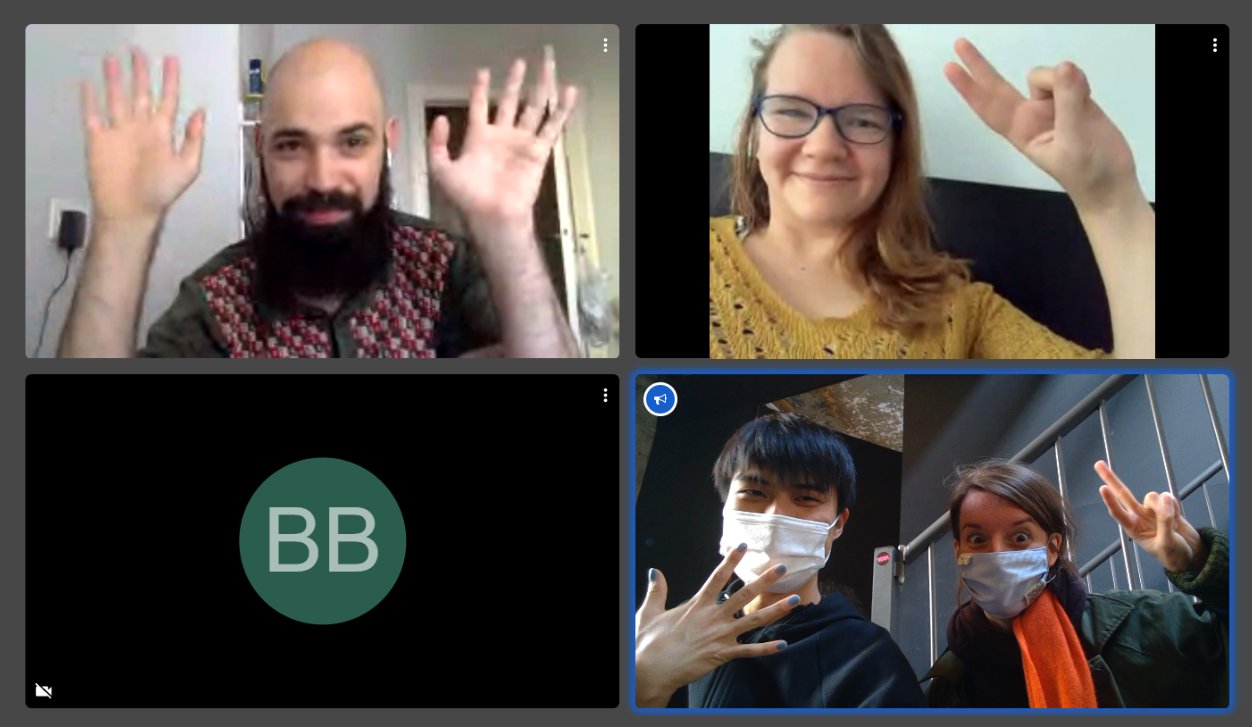 The vernissage is a collaboration of Tokyo Developers Study Weekend (TDSW) and Processing Community Japan (PCJ). I collaborated with Yasushi Harada and Yuki Narumi from TDSW and Shunsuke Takawo from PCJ as myself being an organizer of PCJ. We invited community members from both organizations, TouchDesigner users and Processing/p5.js users to an empty space in GreenHouse NAXOS and let them hang their artworks. Thus, it was indeed an exhibition but also built up during the vernissage to be exhibited during the rest of the festival week. The exhibition can be accessed here, which is online as long as the festival hubs server is up.

Hydra is a live-coding environment inspired by analog video synthesizer. Olivia Jack, the creator of Hydra, Flor de Fuego and Naoto Hieda hosted the second Hydra meetup. As we did in the first meetup, we setup a website where participants can post their introductions. There were 3 presentations with the theme of remote collaboration, by Maria Witek, munshkr and myself. The presentations are archived here:

The meetup was followed by a live-coding jam using flok developed by munshkr. Anyone participating in the meetup could edit the hydra code together for jamming, which was screened in GreenHouse NAXOS.

The Best Practices is a session proposed by Jorge Guevara and myself originated from the Choreographic Coding Online sessions back in April. In a video call, we use live-coding tools such as Hydra to mix, to alter and to add glitches to their videos. Since then, we are continuing a weekly “practice” of moving and coding together for an hour, and recently, we started a weekly discussion to reflect on what we are doing, experiencing and projecting. Following our format, we had a discussion session a day before the practice.

While we usually practice in a video call from Belgium and Germany, this time we were in a same room, and the videos were screened in GreenHouse NAXOS. Because of the setup, we had some difficulties during the practice but we had a magical moment towards the end, when we danced together going back and forth between computers.

The following day, we made a post-discussion to reflect on the experience of the special practice.

Although Jorge and I have been working together for half a year, NODE20 was the first time we met in person. Jorge was the only one to be in Frankfurt together from CCLOnline, and I am very grateful to the NODE team for making this happen and accommodated both of us.

Nien Tzu Weng, a dancer/choreographer based in Montreal, and I have known each other since I was living in Montreal, and recently we had a chance to collaborate again during quarantine, thanks to opportunities from Centre de Création O Vertigo and Canada Council. We made another experiment during NODE20, using Miro, an online whiteboard, chroma keying and GreenHouse NAXOS.

Distant Movements (DM) is a session organized by Annie Abrahams, Daniel Pinheiro and Muriel Piqué. Having eyes closed, participants are invited to move with others for 15 minutes in a Zoom call. Everyone is connected by audio as we leave microphones on, and the three guides us through. Full information can be found here. I actively joined the sessions as well as Distant Feelings, and therefore, I invited them for a one-off session at NODE20.