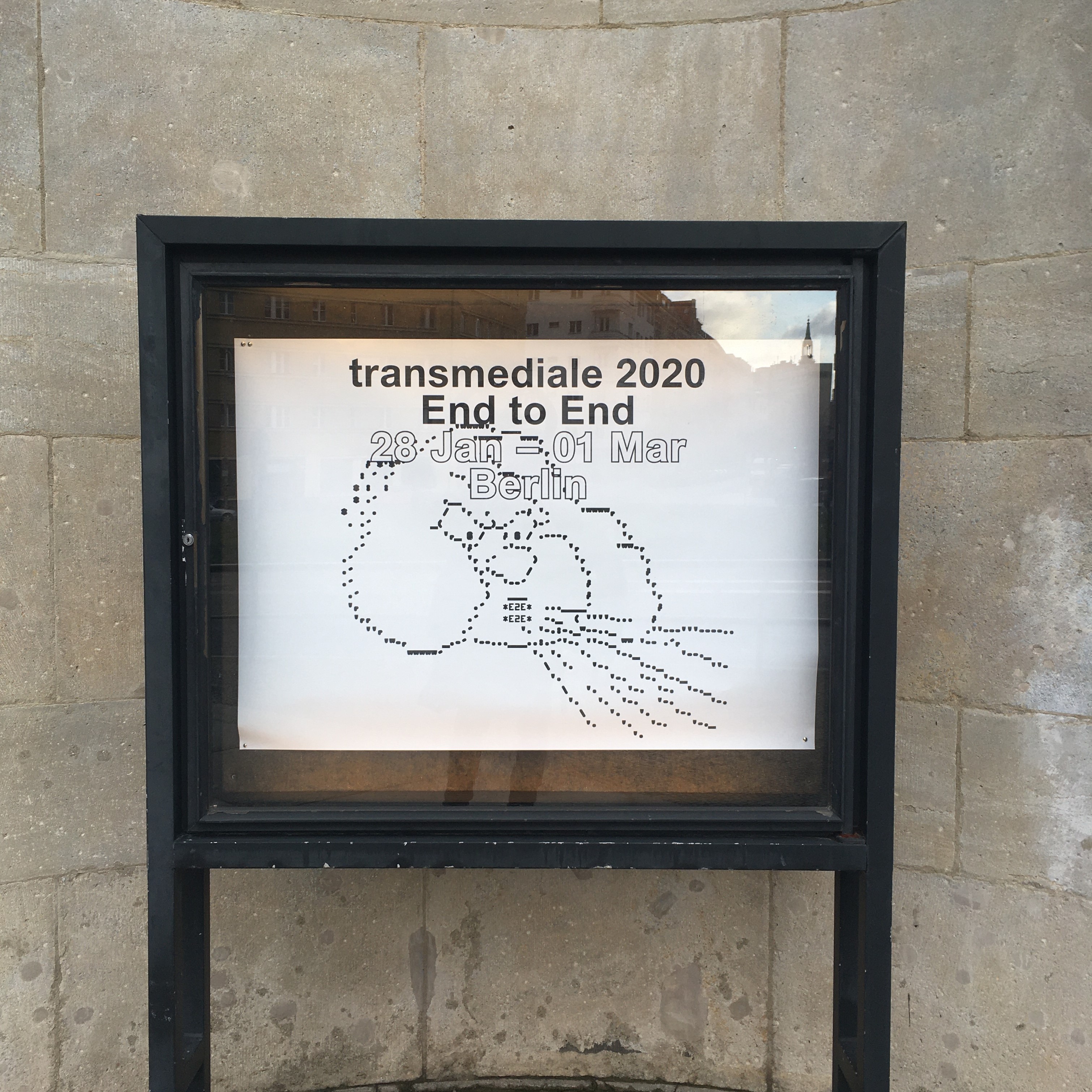 I participated in Transmediale Symposium, which was held on Jan 31 and Feb 1, 2020.

The trip was part of Academy of Media Arts Cologne (Kunsthochschule für Medien Köln, KHM), where I am studying at. A seminar about Internet lead by Hans Berhnard and others organized an excursion to Transmediale and around 20 people traveled from Cologne to Berlin and attended the symposium. It was very easy for me as the trip was organized and I did not have to present, which makes a huge difference compared to when you participate as a presenter. Each seminar has an allocated budget, and thus the full price of the symposium ticket and the half of travel expense were covered by the school. I only needed to find lodging, which I asked a friend who I worked together last summer for an exhibition, and I borrowed his bike to Volksbühne, the event venue.

It was my first time at Transmediale, and in this edition they discussed issues such as discrimination and machine learning in digital culture including digital art. Each session has around 5 presenters, and 2 to 3 of them gave a talk before the round table.

The first session was about when and where of network addressing discrimination. Michelle M. Wright gave a powerful speech, and she reminded us about white supremacy - for example, if you study what African women were doing during World War II, they would never think about themselves, what is she doing during WWII. The session moderator, Diana McCarty, is a good friend of Hans and in fact she gave a presentation at our school, KHM. At that time I talked with her during the Q&A and also after the seminar. She was saying that rather than a formal talk, networking when you are smoking is more important, and I think this is true because I had a few chances to talk with her while she is smoking (although I do not smoke, I do enjoy chatting with smokers), and she always gave me interesting references to my research projects.

Olia Lialina’s lecture performance “end-to-end, p2p, my to me” was using her archive of websites on Geocities. She performs like a DJ by opening multiple tabs of webpages with background music, and she gave a systematic explanation of common phrases such as “welcome to my page” and “under construction” used in websites in the early days of the Internet. Unfortunately the performance was interrupted by bad internet connection and she had to use screen captures. The presentation was highly inspiring for me as I am currently working on archiving as a web residency artist. After the talk, she showed us Best Effort Network, another project of her, which only shows the avatar if you are the only one watching this website.

At the session about cloud computing, I found Ulises Ali Mejias’ presentation about node very interesting. He claims that nodocentrism is dominating the network, which implies that network consists of the connection between nodes; however, Ulises introduces paranodality, which suggests to look at the space between the nodes, showing a photo of two lanes, one packed with pedestrians and the other is empty only with one cyclist.

Katharine Jarmul’s “Hacking ‘AI’” was about adversarial attack on neural networks; for example, a toy of a turtle with a special pattern can be recognized as a rifle. Other examples include facial makeup to screw up the landmarks of face tracking, a clothing covered with license plates, and a browser addon Privacy Possum, which send fake data to servers. These ideas are for protecting our privacies by sending false data to make the collected data less usable for the companies.

At the screening after the closing of the symposium was a double bill of Myriam Bleau and Lawrence Lek. Myriam Bleau’s Eternity Be Kind was a video piece of an avatar dancing to a music, and four iPads on the stage was showing text following the video. The idea was that the audience can also see the text by connecting their smartphones to a Wi-Fi network, but it seemed the server was not available and as long as I know, no one could see it on the phone. The second piece, AIDOL 爱道 by Lawrence Lek was a speculation of artificial intelligence through current digital cultures like Internet celebrities and e-sports.

Below is my miscellaneous impressions about the symposium. It was somewhat limiting to move as a group from the school because if you are with other friends you know, networking might be reluctant. Also, there were some mandatory meetings that might have blocked us from seeing others. As Diana said at the seminar in KHM, not only listening to the talks but networking while smoking is important. In fact I was not at the “mandatory” meetings - I am aware that I am acting like a diva in the school, but I think it is fine as long as I have good relationships with the professors and teaching staffs.

But to be honest, I was quite exhausted from networking. When I participate as a presenter, networking is easier as I do not have to introduce myself and people come to me to talk. This time, I had to introduce myself to people I meet for the first time as well as why I am interested in that person. This processing is especially difficult for me, being Asperger’s. By the way, I was happy that finally I could talk to Nadja Buttendorf, a media artist often works on finger nails. I was following her since I saw her work about soft nails and ASMR.

I was talking about the contents of the symposium, which was very academic and was difficult to follow for those from art or engineering. Also, some talks are indeed interesting but difficult to follow as they are reading the text and not presenting (I am critical about this point because of my old mentor in engineering as well as my approach to presentation being lecture-presentation). It might be a waste of time for some of the students - also professors would not understand most of the contents, but they do know how to pick up what is related to them and being critical from that point of view. I think what is important is to have regular opportunities to discuss issues such as ethics in machine learning, and in this sense organizations such as Disruption Network Lab in Berlin and School for Poetic Computation in New York, to name a few, should be respected, and I would consider incorporating it to my networks such as Processing Community Day Tokyo and Creative Code Köln.