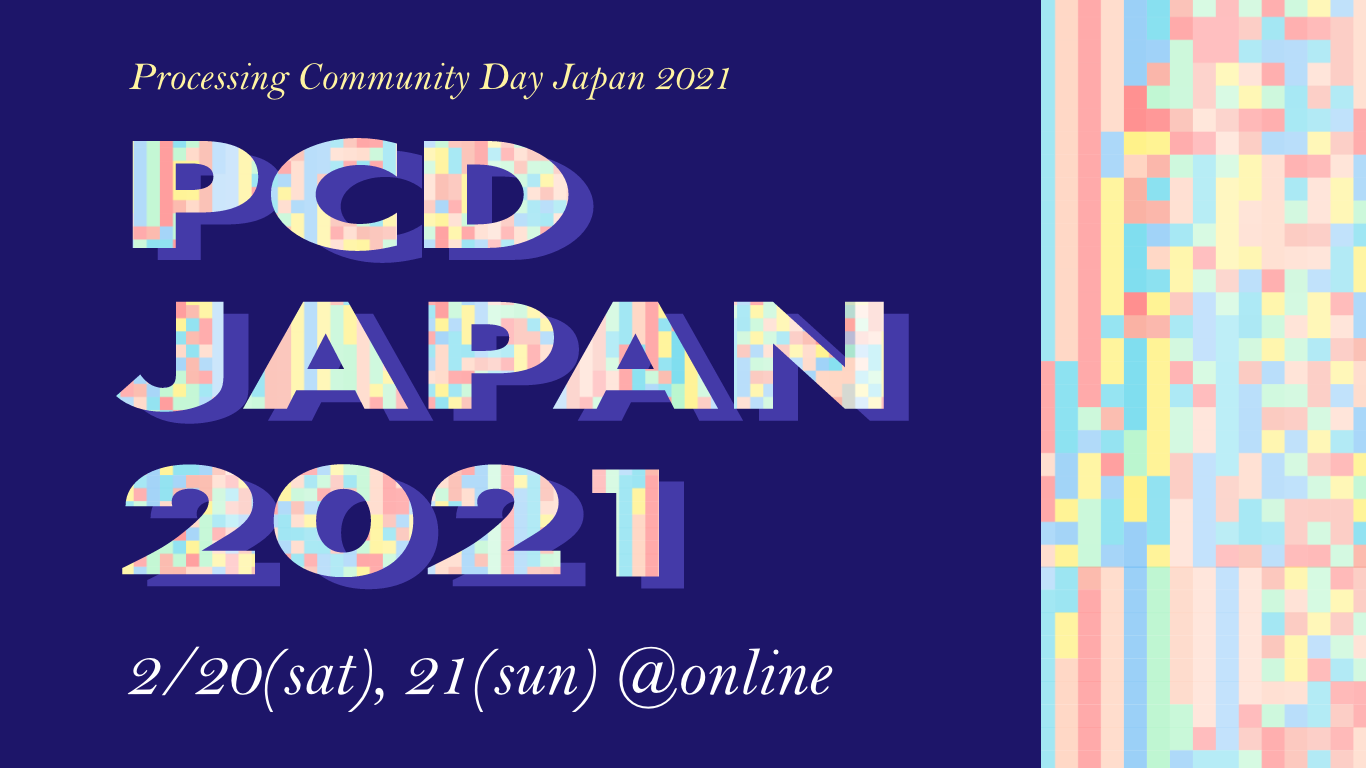 Processing Community Day Japan was held on February 20th and 21st, 2021. While the last 2 events (2019 and 2020) were named PCD Tokyo and held at Yahoo! LODGE in Tokyo, we rebranded it as PCD Japan to be an online and more inclusive event. I would like to do a recap from the perspective of an organzier.

The first challenge was to decide the scale of the event. For on-site events, the number of the guests is capped by the capacity of the space (and fortunately tickets were sold out for the last 2 PCDs); however, online events can have unlimited number of guests (in fact the limit depends on the capacity of the Zoom license) while it may end up with a small number of people with poor promotion. In the past events, we had sponsors offered us the venue and equipment, and this time, fortunately, we found financial sponsors to facilitate the organization. I would like to thank Daito Manabe (Rhizomatiks) and MIKIKO (Elevenplay), who generously supported the event. Furthermore, OpenProcessing kindly offered us free membership for all the participants, which helped us form a vision of PCD that is not only a one-time event but rather a movement involving the community.

While the event was scheduled on 20th and 21st, we launched “asynchronous” events on 13th.

The PCD website and branding were done by Hina Nakamura, reflecting a pop image of the Japanese Processing community. The design is directed by herself and is a perfect match to the event. It is worth noting that the background image is made by p5.js so that I could remix it for advertisements. 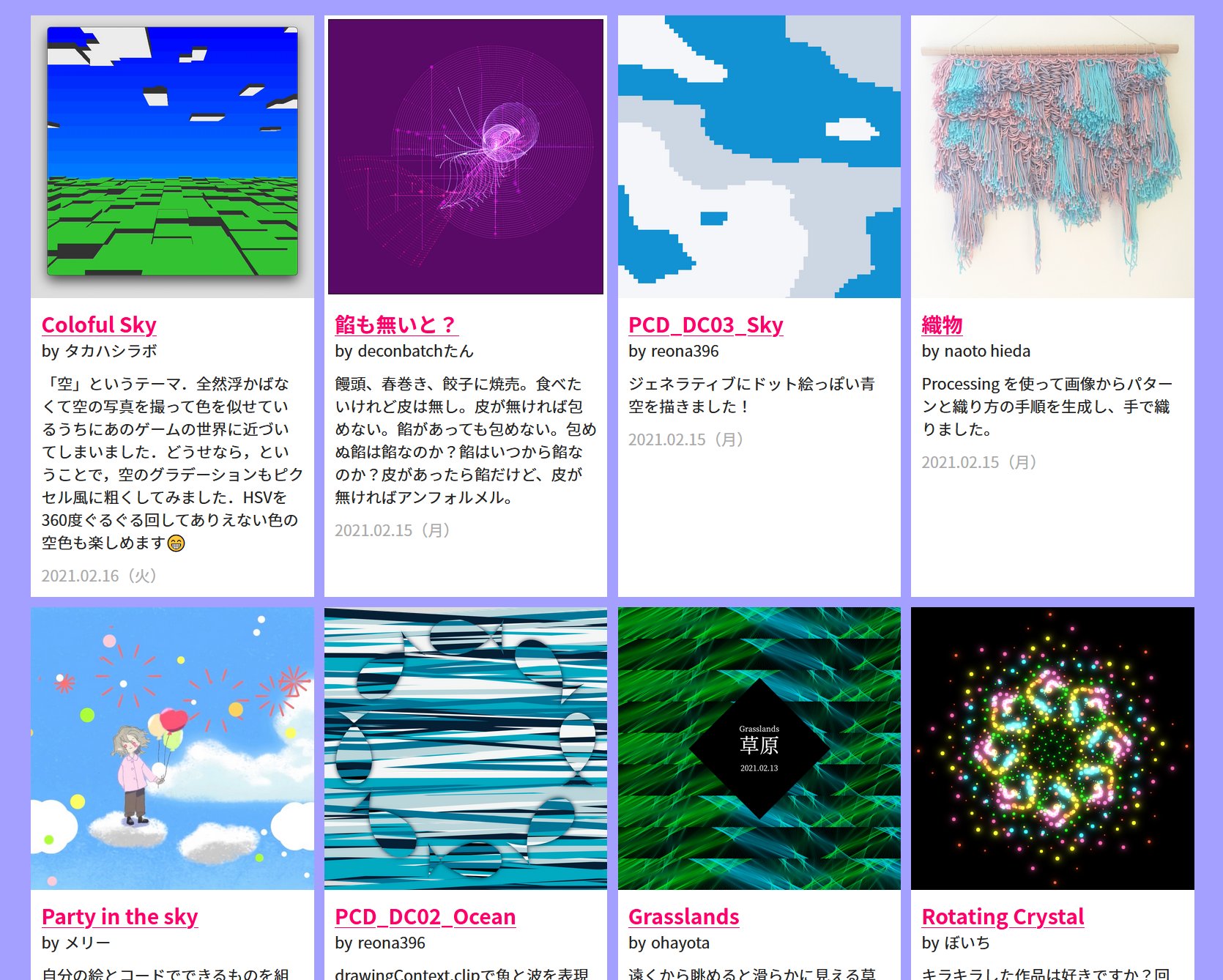 Sketches contributed by the community

PCD Japan Gallery is a communal gallery that anyone can contribute, developed by Niinomi, who also volunteered for PCD Tokyo 2020. The gallery is not curated but anyone can post, and diverse works especially from daily coding were submitted. 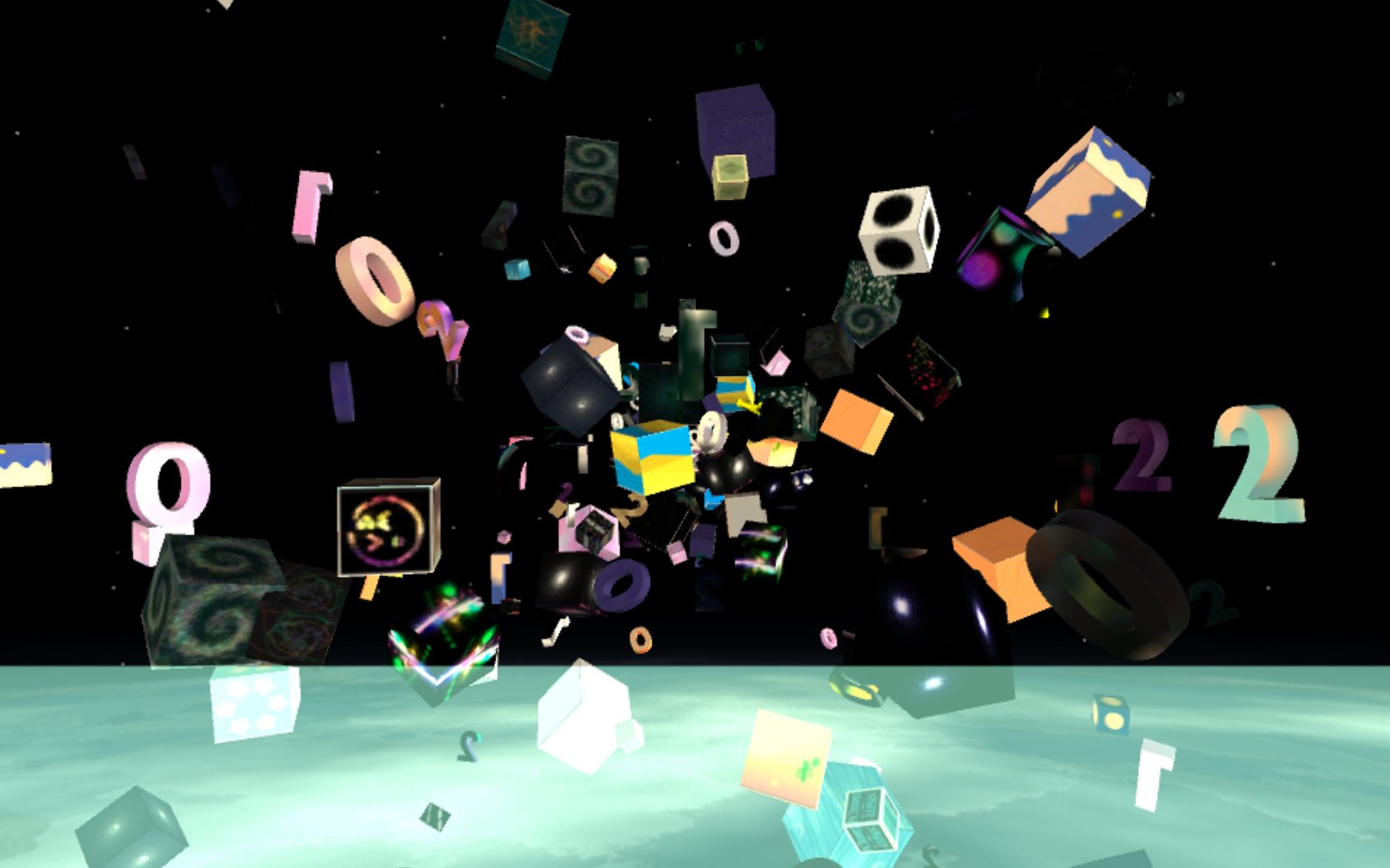 Featuring works from the community members. The theme is “outer space”

We launched the “daily coding” week prior to the event. Last year, we organized a “daily coding” month and more than 50 people participated, but we regret that we did not archive the sketches posted on Twitter. The 3D gallery by Wo is created to scrape images from Twitter and to archive the community-contributed sketches. 7 gallery spaces are prepared, and each room’s motif is reflected to the theme of the day for daily coding. Sketches posted on Twitter are scraped and uploaded every day to the gallery. Though most of the contents of PCD Japan were in Japanese, this activity can be participated in any language so I prepared the “prompt list” of the week in Japanese and English. As I expected, people outside Japan also participated. 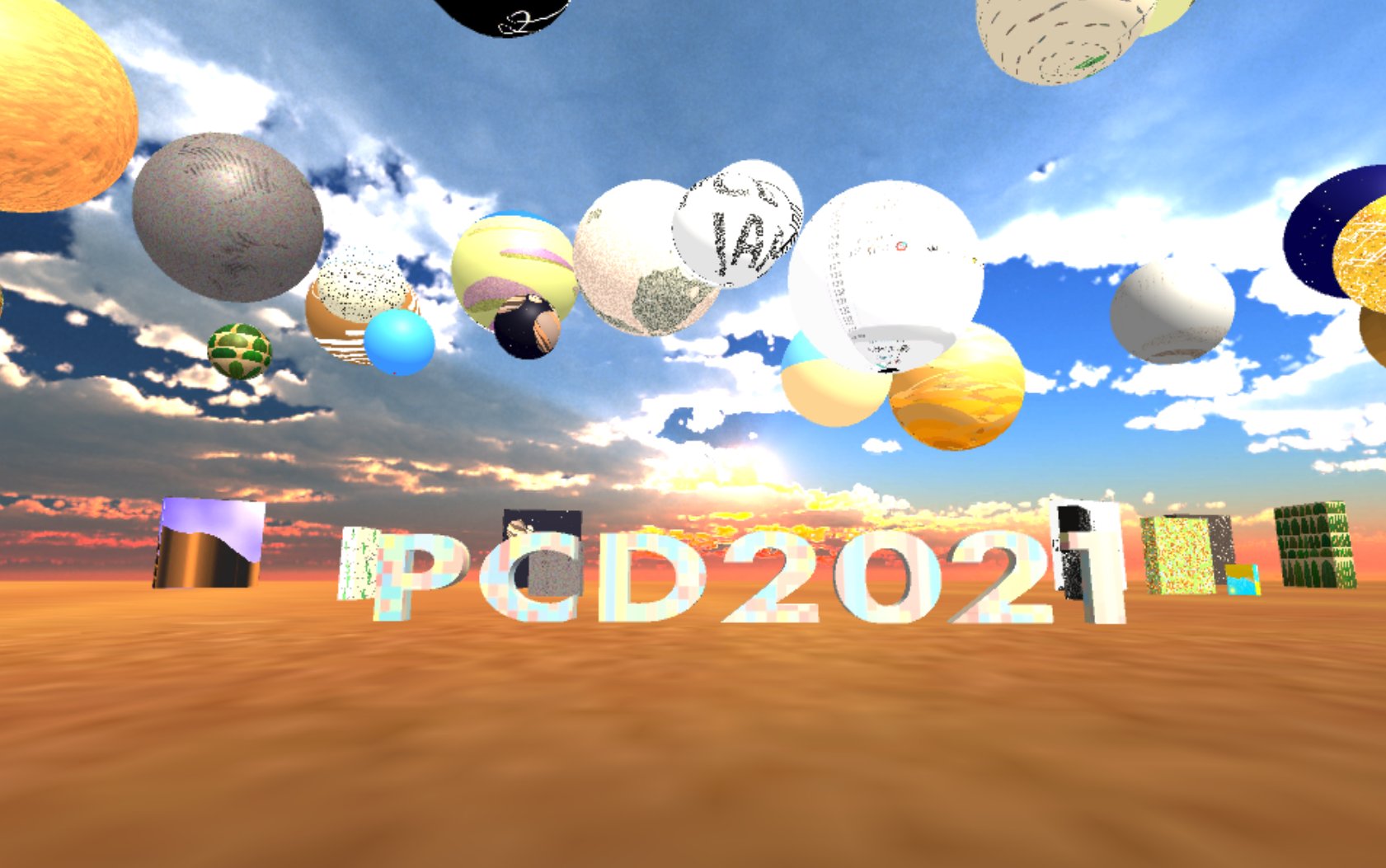 In parallel to the activities above, 3 young artists created design for T-shirts. Since 100pHz proposed the idea and Reona396 offered to be a mentor, Yamo and eboshidori joined the team. T-shirts are on sale here and the profit will contribute to the fee of the volunteers.

The archive of the streaming can be found here. While most of the contents are in Japanese, you can skip to Dan Shiffman’s message: 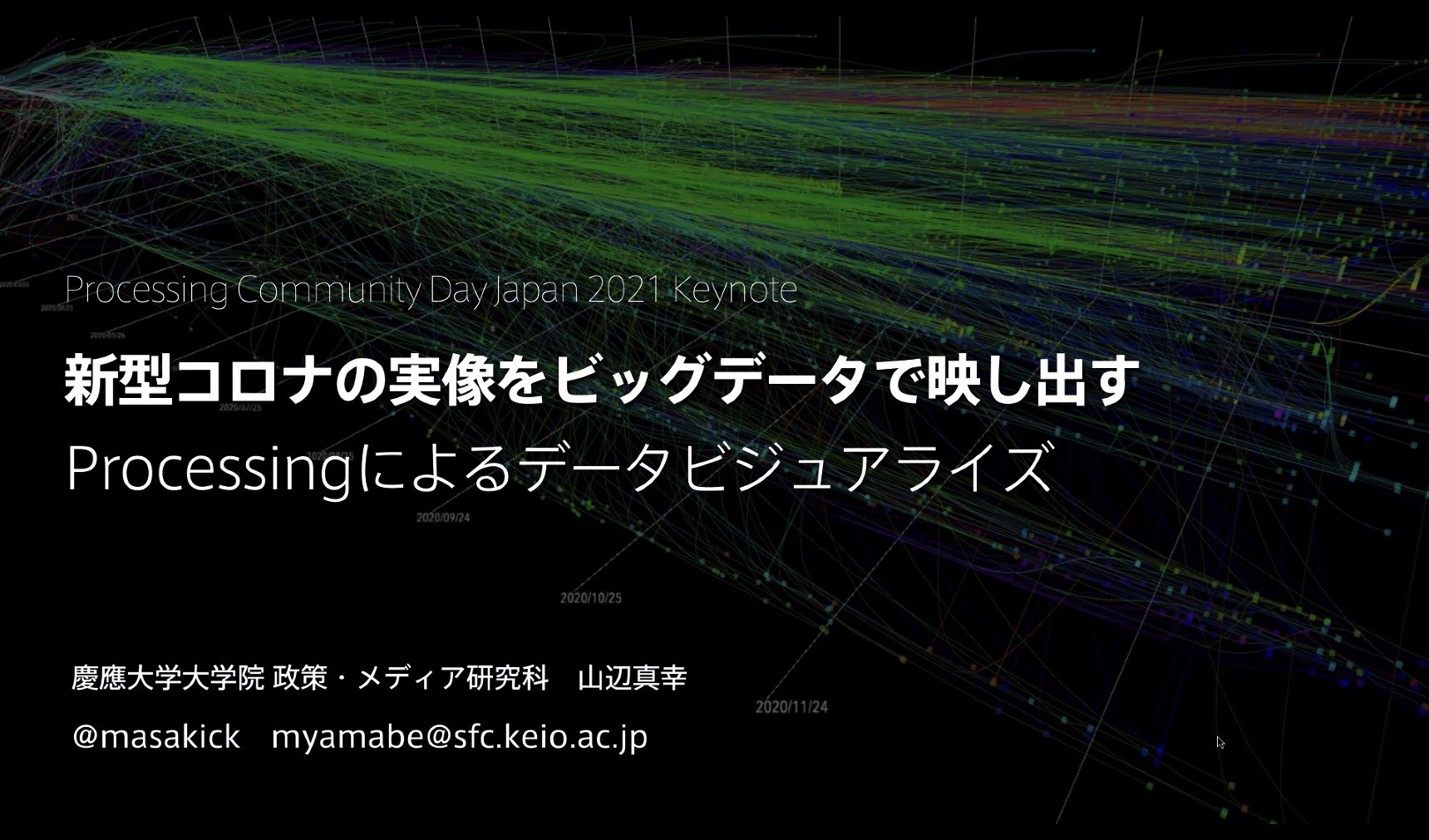 The keynote by Masaki Yamabe is about data visualization of coronavirus. He has been working with NHK, the public broadcaster, for visualizing the spread of coronavirus optimized for 4K and 8K high-resolution monitors. Besides the technical details of this project, he shared the stories when he had a chance to work with John Maeda and Casey Reas, and how he discovered Processing. This year Processing marks 20th anniversary, and Masaki’s stories about Design by Numbers and drawing with native Java would appear fresh to the new generation.

You can find the documentation on Masaki’s Vimeo. 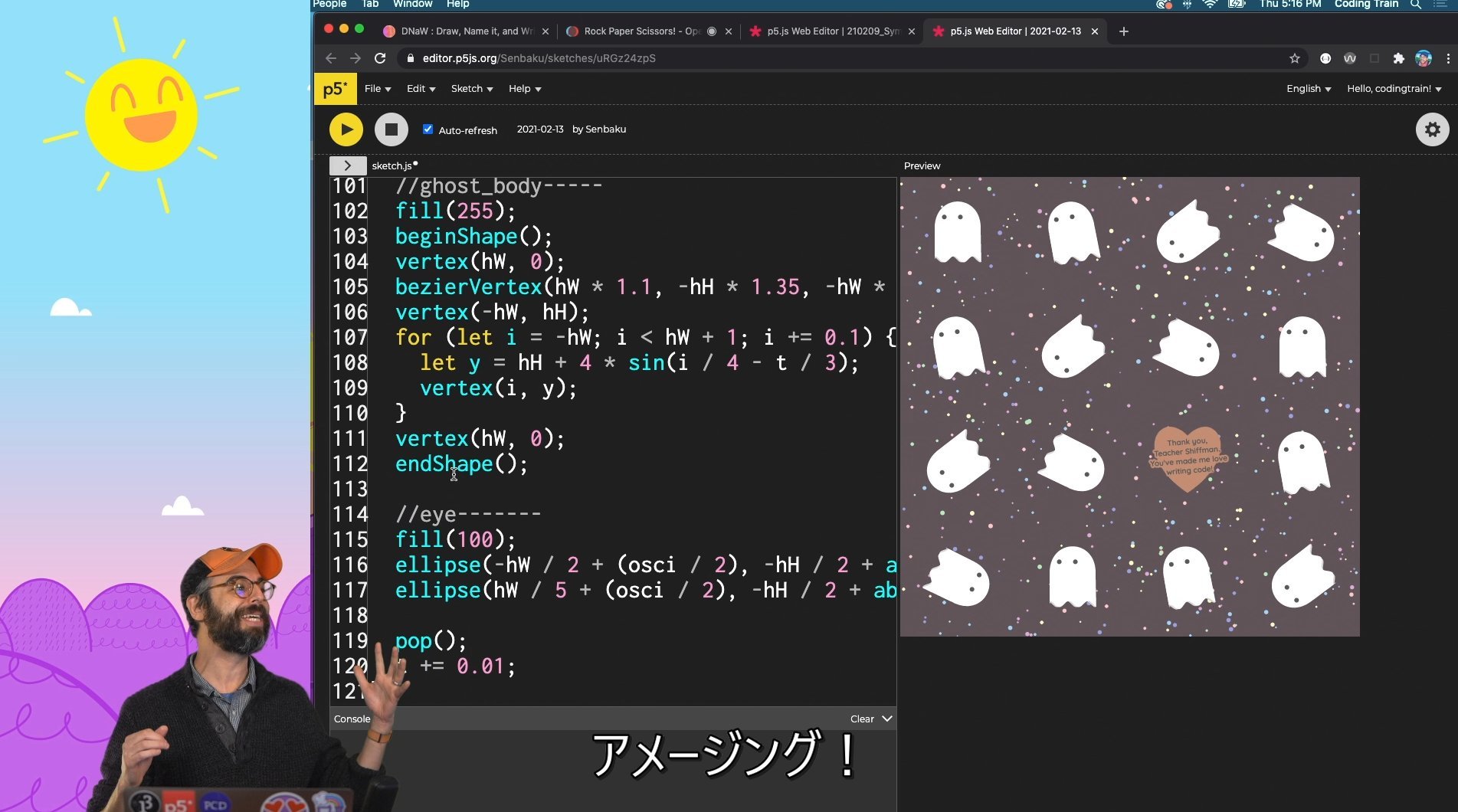 We had a surprise guest, Dan Shiffman from the Coding Train, who kindly recorded a 6-minute video message for us. He has been loosely in our “movement” trying Tweet Processing (a sketch that fits in 280 characters started by Hau-kun described below), and I asked him if it is possible to be part of PCD Japan. To make it enjoyable for Dan himself as well, I collected a few sketches from the community and sent to him to ask for comments. deconbatch and Reona396 created sketches that use ml5.js for image recognition and hand pose tracking, respectively. Hau-kun started Tweet Processing (#つぶやきProcessing) and has been actively posting sketches on Twitter. He created a kaleidoscopic drawing sketch that has a blurry effect and colors and still fits in 280 characters. Senbaku studies p5.js from the Nature of Code and videos from the Coding Train, and she created cute ghost characters shown in the screenshot. It was an exhausting task to interpret and to add subtitles but was worth doing as it is such a lovely video.

Three speakers, ayakooo, Chinyuri and So Kanno were invited to the panel about how to continue creative activities as your lifestyle. I moderated the session and curated the speaker from our generation and having diverse backgrounds, especially not focusing on the advertising or gaming industry that often creative coders think as a career path. ayakooo gave a workshop at the last PCD about audioreactivity using Ableton Live and Processing, and she is active in education and creation. Chinyuri made the website of the last PCD Tokyo, and she produces illustrations and merchandise of her own character “Matchaneko” (literally green-tea cat) while working as a web engineer. I know So as we often hung out when I was in Berlin, and I wanted to learn more about his artist life as he is a “rock star” in the media art scene of our generation famous for “Lasermice” robot piece (in fact he is a very humble and friendly person who I really respect).

The talk was about a career path and we also talked about applying for grants to fund own projects. Prior to the talk, I asked them questions and one of the topics that I could not cover in the talk was how to become an artist who you admire. They all answered that they used to have a role model, but now they do not, and they simply continue their works from their passion. After they graduate from art or design schools, they have been working as an assistant at a school or working on commercial projects for their living while working on their sound, illustration or robotics projects. I hope the panel motivated students and young artists to continue their creation.

On 21st, we organized 3 workshops. In the past PCDs, the workshops happened as multiple tracks and we could not record or stream them. This time, as we organized them on a video call, we could record all the sessions and the workshop leaders kindly allowed us to publish. We appreciate that the workshops were successful as each session had around 50 participants.

Sayama gave a workshop on making illustration-like p5.js sketches. His misterious creation process is finally uncovered; also we appreciate that he used the tutorial feature of OpenProcessing as you can find here. The tutorial and video are in Japanese, but the code snippets should be universal for everyone. We also collected sketches made by the workshop participants.

I have been willing to invite Chiho Oka for a livecoding workshop for a while, and finally we had her workshop at the PCD. While the full version of TidalCycles requires installation of SuperCollider and toolset that can be a tedious process, we used a subset MiniTidal that can run on a browser using Estuary platform. Part of the workshop became chaotic as everyone started jamming on Estuary, which also means how much people enjoyed the workshop. We are planning to continue workshops including ones with the full version of TidalCycles. The video is in Japanese, but you can find a recording of part of the session here.

I added an extra workshop about Hydra livecoding visuals led by myself. Based on the workshop I gave with Flor de Fuego in January, I translated the content to Japanese. The video above is the one with Flor gave in English, and you can find workshop material here, written in English, Spanish and Japanese.

I would like to thank everyone being part of PCD.